Breaking Bread: A Recipe for the Cook

Gus Frings, the Mexican chicken magnate and the southwest's top crystal meth kingpin just invited his most valuable employee, Walter White, over to the house for dinner. But as always, Walt knew the subtext and tried to blind him with science. 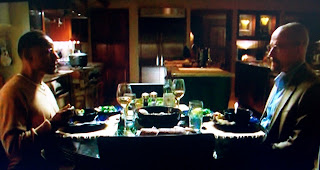 Gus:
"It always amazes me the way the senses work in connection to my brain...Taken separately, these ingredients alone don't remind me of anything...But in this precise combination, the smell of this meal instantly brings me back to my childhood. How is that possible?"
Walt:
"Basically it all takes place in the hippocampus. Neural connections are formed. The senses make the neurons express signals that go right back to the same part of the brain as before...Where memory is stored. It's something called relational memory."
But what Gus really smells is a rat, not in the mafioso sense, just one who is nibbling from his cheese. Simply put, Jesse Pinkman, Walt's resourceful but foolish partner may have just become an endangered species.
While that one scene dictates exactly where Breaking Bad is headed next, two amazing sub-plots have emerged that nobody ever could have seen coming:
When Skyler Met Saul
Saul Goodman:
"Clearly Walt's taste in women is the same as his taste in lawyers. Only the very best, with just the right amount of dirty." 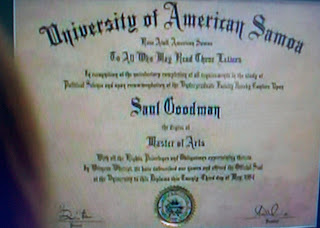 Since Walt's extensive bankroll is going to fund the recovery of their brother-in-law (enforcement), Skyler needs to know that the laundered money is "unimpeachable."
As events unfold, Skyler injects herself as a point person in the process. Oh, and by the way we're not divorced after all - so we can't be compelled to testify against each other.
Avenging Combo
Jesse has always come across as a wannabe gangster. Yes, he's the self-admitted "bad guy," but he's clearly loyal and has a good heart when it comes to things, and people, that matter.
But through a random turn of events, another door has opened to his painful past. Jesse has tracked down the pre-teen gunman, and the soulless crew responsible for the assassination of his best friend. 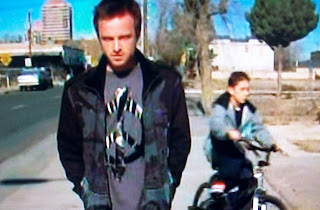 Now Jesse's yin and yang are in unison. In one look you know he wants to wipe out Combo's killers, the ones who would use a 10-year old boy to sling and slay. And he can do it with a clear conscience in the name of righteousness.
Posted by BACKTIME at 7:57 PM 1 comment: 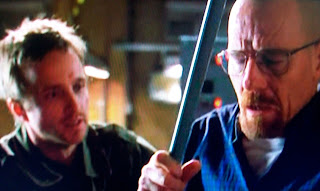 If you hadn't noticed, last night was a pretty wild TV night. There was the Series Finale of Lost (a show I have still never seen) and the Season Finale of Family Guy. There was Yankees/Mets and NBA Western Conference Finals.
There was the up and coming Treme' - created by David Simon, who is the brains behind Homicide - the best-ever network TV drama and The Wire - the best-ever overall TV drama. And Treme' is off to a great start with it's gritty, authentic look at New Orleans through the sound (and lots of subtext) from the music. But it's only a few episodes in.
Breaking Bad, the ultimate can't miss-TV has been ramping up the intensity in every episode of its 3rd season: complete with drug cartels, assassination attempts, law enforcement brutality, divorce, lies, more lies, and lots of money.
***CAUTION-SPOILERS***
But last night's episode took a break from all of that, and returned to the very soul of the show. And from the previews last week you could see it coming. The "scenes for next week" contained only our two main characters: Walt and Jesse - and they were in a lab.
While circumstances boil around them, it is the "chemistry" between Walt and Jesse that made and continues to make the show what it is. And last night was a return to that. 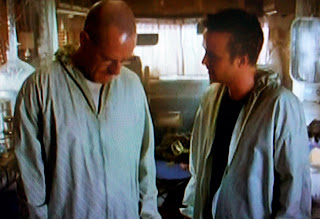 It was so reminiscent of the previous seasons when the two mis-matched partners were cooking meth in the RV in the desert for their lives. Now they're both millionaires, cooking in a state-of-the-art chemical lab behind the curtain of a powerhouse wholesaler. But at the core, their relationship is the same.
The two may bicker and fight, but they also share their deepest feelings and regrets, things they would never tell another human being. They solve problems. They take turns being the reckless one or the irresponsible one. They're co-dependent. They're soulmates. 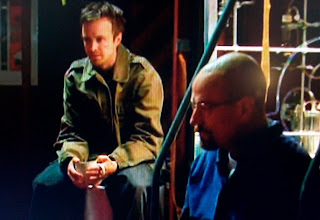 Just to surmise: A 50-year old high school chemistry teach gets a cancer diagnosis that is essentially a death sentence. He finds by happenstance a junkie, drop-out former student of his who shows him the ropes in the world of methamphetamine manufacturing and distribution. They catch the eye of the southwest's number one kingpin, who makes them both very, very rich.
As Walt ("Mr. White" as Jesse still calls him) would say, "sub-atomic particles that are constantly in random collision. Science dictates this." So what are the odds? They're astronomical, incalculable.
But as the money piles up, their problems get deeper and more complicated, and get more and more tangled in the web they have woven.
The fly, the "contaminant" they were trying to kill in the lab was a metaphor. They killed the fly which enabled them to complete their work, their quota. But don't worry, there will be a new fly in the ointment soon enough. The mathematical probabilities dictate it as a certainty.
Posted by BACKTIME at 1:26 PM No comments:

Who Will Net LeBron?

Remember the 2007 World Series? The Red Sox were about to sweep Colorado for their 2nd title in 4 years, but as Boston was just a few outs away from a championship, it was leaked that Alex Rodriguez was opting out of his Yankee contract.
It was a power play by Super Agent Scott Boras (and some say A-Rod himself) to thrust his client's free agent status on to baseball's biggest forum and upstage it.
Now the same is true of LeBron James. Except nobody has to concoct any publicity ploys, and the season has a full month plus an amateur draft for the LeBron situation to simmer on the stove. It is one of the most fascinating offseason developments of all time, except the season is still on!
So how does one gauge the ebbs and flows of this moving target? It's simple, gamble on it. And more than that, you can buy or sell your position like a commodity as the rumor winds blow.
Just like Intrade.com, the prediction market that was thrust into the national spotlight during the 2008 presidential election season: You buy a contract or a series of contracts and each is worth $100 if it proves out but zero if it doesn't. You can buy or sell, making a profit or cutting your losses along the way.
Sites like The World Sports Exchange offer this type of action:

You can see, Cleveland is a slight favorite to retain LeBron, followed closely by Chicago and the Knicks.
We at Backtime think that his return to Cleveland is an impossibility. If he didn't win there last year or this year, he never will. Let's go make his fortune somewhere else under a greater spotlight in his quest to become the first billionaire athlete.
The real darkhorse is New Jersey, which you can buy in at 13-1, but has incredible buy-low, sell-high possibilities. I mean maybe I got sold a bag of goods by new Nets owner Mikhail Prokhorov during Mike Francesa's sprawling, entertaining 50-minute interview today on WFAN/YES. 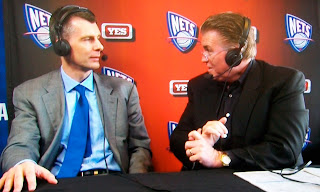 Prokhorov said the Nets (worst record in the NBA this year) would be a playoff team in one year, an NBA champion within 5 years, and with a dynasty to follow. He mentioned on many occasions during the interview "surprises" that would boost the profile and the quality of the floundering Nets franchise.
The Nets will be moving to a brand-new venue in Brooklyn within a couple of years, and there may be a change in the team's name that coincides with that.
Prokhorov is a 6-foot-7-inch, 45-year old self-made billionaire. His personal wealth is listed at 13.4 billion and Forbes ranks him as the 39th richest individual in the world. He's richer than Mark Cuban, and cooler than James Bond. LeBron may very well be listening to what this man has to say.
Not to mention, LeBron's buddy Jay-Z is still a minority owner in the franchise, and also wants a seat at the billionaires' table. 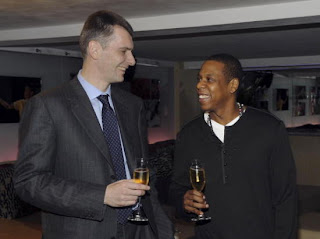 Now, who will coach the Nets is a mystery as well. But it doesn't quite capture America's imagination.
Posted by BACKTIME at 9:53 PM No comments:

As a die-hard Yankee fan, I have to laugh off the haters out there that claim the Yankees buy championships. Now the Yankee empire is certainly capable of spending big money for free agents, or trading for stars who command bigger salaries.
But it's the cultivation and maturation of players you watch their whole career that makes you so attached to your particular team. 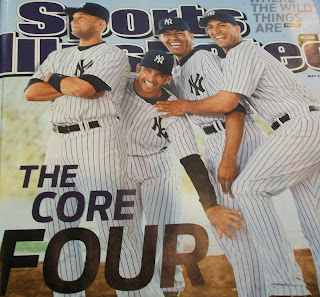 I remember Mariano Rivera coming up as an electric starting pitcher in 1995.
I remember Andy Pettitte, as a 24-year old, beating John Smoltz 1-0 in Game 5 of the '96 Series.
I remember Jorge Posada's solo Home Run at 9:11 PM in game 3 of the 2001 World Series.
And Derek Jeter continues to make memories along with the rest of them.
Now you can make arguments that the Yankees, unlike other teams, have the ability to pay their own stars when they reach a certain level of seniority while other teams don't. That's a more valid argument than the purchasing of pennants, but it's still all about the commitment of the organization to develop their own guys.

EXHIBIT A - Robinson Cano
A born-and-bred Yankee is now in his 6th season, complementing Jeter up the middle at Second Base. He plays slick defense every day, and carries a .308 career average (and rising).
This year he's been moved to the 5th slot in the lineup, so his bat protects A-Rod.

EXHIBIT B - Phil Hughes
The 23-year old "5th" starter was integral as the 8th inning guy last year. Now he's been moved back to his natural role of starting pitcher and is a sensational 5-0, 1.38 ERA in 6 starts.
Hughes was a 1st Round pick by the Yankees, as was...

EXHIBIT C - Joba Chamberlain
He flip-flopped with Hughes and is now the set-up man for Rivera again, a role he burst on the scene to in 2007. He looks to have the stuff and the closer demeanor. He saved two games last week while Mariano was a little sore and tight, and Joba seems like the heir apparent in that role.

EXHIBIT D - Brett Gardner
After the Yanks' 2009 Championship, they waved goodbye to outfielders Johnny Damon and Melky Cabrera (sigh), and made a commitment to a different kind of Yankee.
Gardner's gritty style and speed game (16 SB - 2nd in AL) give the Yankees a different dimension than his slugging predecessors. But he's hitting .333 for good measure.
So witness the young home-grown Pinstripers who follow in the footsteps of the iconic ones. And that doesn't even count cult-favorite backup catcher Francisco Cervelli.
Maybe 12-15 years from now, Exhibits A through D will comprise the next generation Core Four. And to watch that progression is what being a baseball team's fan is all about.
Posted by BACKTIME at 2:53 PM No comments: