That's Quite a Pitch

The sight of a 59-year old Tom Watson on the doorstep of a 6th British Open title gets more and more surreal with each cutaway. If Hollywood made a movie about it, nobody would believe it. But we're one glorious day away from sizing up who will play Watson in the movie. 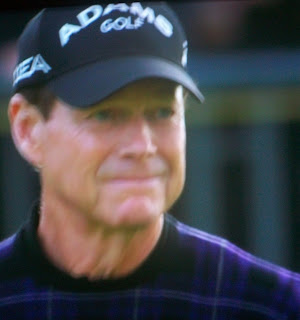 Last year, Greg Norman's run for the championship was electric, but Norman was never regarded as a real threat by the fans or the oddsmakers. The Shark is an icon and a brand name, but for the most part he's not been a finisher.

The difference this year is that Watson has won this title 5 times. He knows how to get it done. And physically, complete with a new hip, he seems not to be at any real disadvantage against players a generation behind.

He is in complete control of his game, and is out-thinking the field and conquering Turnberry before he swings his club. And most unlike Watson, he is draining one improbable putt after another. That's why he is leading and not just in the mix.

UK book-making sites have Watson as the 4th choice going into Sunday's final round, behind two Brits (Westwood & Fisher) and 2-Time US Open champ Retief Goosen. I say watch out for Jim Furyk (3 back) and Angel Cabrera (5 back).

But the point is, he is a legitimate and very real contender for the world's most prestigious golf title...and he was born in the 1940s. This is the sport owned by a young terminator. I'm trying to think of a precedent or a cross-sport analogy, and coming up blank.

Maybe I'll start my first draft of the screenplay at 9AM eastern Sunday.