What We're Not Talking About...Tiger's Game 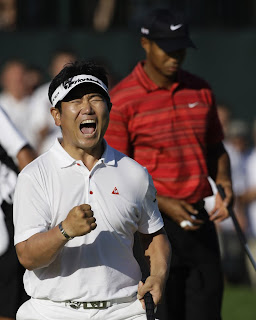 It was 4 months ago when we saw something we hadn't seen before.

It would be wrong to say that Tiger Woods collapsed in the final round of the 2009 PGA Championship at Hazeltine. But he seemed stuck in neutral while zero-time Major winner Y.E. Yang out-wanted it against the world’s most transcendent sports hero.

Tiger still had a great year. He won the Fedex Cup and half a dozen tournaments, but no majors. Which of course is his stated goal: To catch and overtake Jack Nicklaus.

And losing the duel with Yang was the greatest indicator that something was wrong. Because golf, more than any other sport is a mental game. It’s about standing alone over a ball and shutting out the world, focusing on one single thing. That’s usually when Tiger wins titles, before the point of contact.

It’s got to be hard to shut out the world when there’s disquiet in your soul. And that may not affect you on the driving range or even at the turn, but it does on the back nine of a Major championship.

And how could Tiger not be in a crisis of conscience while he was deceiving his family in such a distasteful fashion?

Sure plenty of men (and women) in the world have engaged in this kind of behavior and they can go about their lives with nobody knowing the difference. They just don’t have to sink a 12-foot putt in front of a billion people to stay alive on the 71st hole of a Major.

Nothing in sports compares. Maybe, if a guy stands on the foul line with nobody around him and no time left in a playoff elimination game. But even if he fails, there are teammates and a coach to pick him up. A golfer is truly alone with his thoughts.

Tiger has been the master of focus and mental toughness for so long. As a child, his father used to rattle keys next to his ear while he putted. But now he must fight the distractions in his own head which will be infinitely louder.

He’ll need to resolve that before he gets back on track to win Majors. And we will truly see how mentally tough Tiger is.
Posted by BACKTIME at 1:44 AM