It was a long week full of travel delays, dying laptops, and a long-ass road trip with the kids through the snow (SNOW?) in Alabama. But there's one thing you know you can count on at the end of the road: Tuscaloosa's year-long football season. 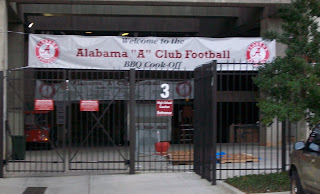 For example, the "A" Club Football BBQ Cook-Off at Bryant-Denny Stadium, featuring such exhilarating celebs from the Crimson Tide's past as Ray Perkins and Siran Stacy, had an attendance of 4,500...about half of the Alabama/Arkansas basketball game just down the street at Coleman Coliseum (the reason I was there).
I paid my respects at Coach Bear Bryant's statue, half-hoping he'd make me run some suicides. But he just stared back at me, grumbling "Yankee" under his breath. 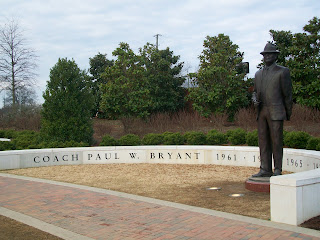 Wonder when the Nick Saban statue goes up? They've got the spot for it (not kidding), just a few feet away. And it will be up by next football season. 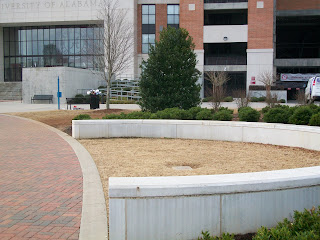 The obsession with Alabama football has got to end. I married a Crimsonette (there's an old expression that Crimsonettes make beautiful babies, but lousy wives) and married into an Alabama football family. After my Tuscaloosa assignment ended, I went to pick up the kids at the in-laws, and I made sure the kids shouted "War Eagle!" instead of goodbye.
As of Valentine's Day 2010, we are an Auburn family. We're going to end this unhealthy obsession one family at a time.
Posted by BACKTIME at 8:48 PM