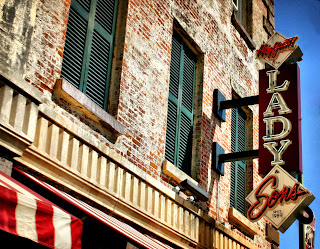 Disclaimer: I am uniquely disqualified to comment on this situation, but here it goes anyway.

My first disqualification is that despite living in Savannah for the better part of 6 years, I know almost nothing about Paula Deen.

My second disqualification is that despite living within walking distance of Ms. Deen's flagship dining establishment, I have never been there. Though I'm sure there's no distance I could walk far enough to burn off all the trans fat I would ingest there. (Please try the Sapphire Grill next door for an outstanding dinner experience)

So now that I've disclaimed my disqualifications, I'd like to dissect this national distraction dispassionately.

I was aghast when I originally read the transcript of Ms. Deen's deposition in the discrimination lawsuit against the Deen family. My original thought is that she deserved to have the hammer come down on her. She was incredibly out-of-touch, and it wasn't just about the use of the infamous "N word." She spoke with a romanticism about the uniquely southern history of masters and servants, which is far worse than any single red-flagged word.

But...how deeply should we punish ignorance?

When your name is your business, as is the case with Paula Deen, everything you do or say reflects on that name. In this case, her own words have done irreparable damage to her brand. She will forever be known for this fiasco. Isn't that punishment enough? Does every single one of her associations have to jump ship?

Ms. Deen is quite obviously mortified by these events. Her apology seems deep and sincere. It starkly contrasts the Rush Limbaugh/Sandra Fluke situation from a year ago when the sponsors ran, and Mr. Limbaugh countered with a non-apology apology.

Paula Deen deserves the opportunity to rebuild her brand and her image, an try to do business differently and put things right. Maybe she can use her name to bring further awareness to the issue and change her legacy for the better. Second chances are the American way.
Posted by BACKTIME at 10:11 PM