Larry David and the Duberstein Dilemma 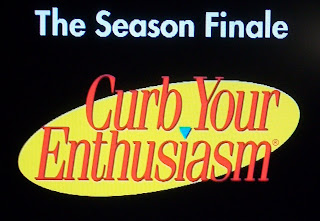 The problem with reaching comic nirvana is that the bar is now set too high. I’m sure that very issue tortures creative types like Larry David. While the season finale still looms, the epic conclusion of the Seinfeld reunion arc, this past season of Curb Your Enthusiasm may be the greatest in the history of TV comedy.

So when we say goodbye to the cast of Curb Your Enthusiasm AND Seinfeld (again) on Sunday night, will this be the end of it all? That’s why Larry David is at the crossroads – will he return to try to cement his place in history as the Neil Armstrong of comedy, or is he already there? That this simply is as good as it gets so why bother to try again?

Because Larry David can’t just retire. He doesn’t fit in the real world, where he is a walking disaster. He belongs on set as the visionary executive producer, where he has power and respect, and gets to make the rules. On some level I can relate. 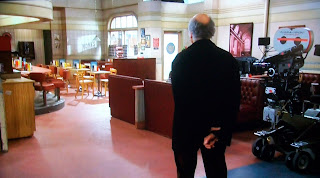 But whatever he decides, we’re just going to have to enjoy this particular train’s last stop. And what a ride. To see Larry and Jerry create, bicker, and feed off each other really gives us a clue how Seinfeld’s quirky dynamic came about in the first place.

Think about the intricacies in the “episode within an episode” of the faux Seinfeld reunion.

Like Elaine having a baby with Jerry’s sperm donation, and her kid calls him Uncle Jerry.

Or George making millions on his iToliet application, only to invest it with Bernie Madoff.

But the real genius was the way the Michael Richards situation was handled and the epic comedy scene with “the two Kramers.”

Leon, Larry’s housemate, serves nearly the same purpose as Kramer did in Jerry’s apartment – a hilariously dependant and oblivious sycophant. And Larry, like Jerry, is just as co-dependent as his friend/neighbor is.

Larry sends Leon into Richards’ trailer as an impostor for “Duberstein,” a dead man who passed from Groat’s disease, a malady that Richards has now been diagnosed with, in order to encourage him that he’ll pull through.

When Richards answers the door, Leon is wearing horn-rim glasses and a bowtie (failing miserably to represent as Duberstein the accountant). But Richards thinks he’s a black Muslim and cowers in fear, “Look I made a mistake…It’s been 3 years…Don’t hurt me! Please!”

While Larry David’s exposition of Richards’ public humiliation wipes his slate clean in one line, the scene-stealer is Leon’s wild portrayal of Duberstein at Richards’ expense. The lie just keeps getting more and more outrageous. I almost fell off the couch while I was sitting on it. 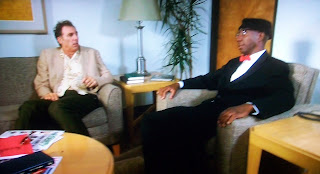 Leon spoke of himself in the third person telling Richards that “Danny Duberstein’s good at two things, that’s Math…and fucking.”

Leon tells Larry after the fact that he “Dubersteined the fuck out of that goofy motherfucker.” Meanwhile, Leon has never seen Seinfeld in his life and has no idea who anyone is while he wolfs down grapes on the set.

Everything seems under control, until of course it isn’t (thanks Marty Funkhauser). And those results ultimately pay off the Richards situation even more brilliantly.

While Seinfeld bragged often that it was “a show about nothing,” Curb Your Enthusiasm is a show about too much, or is it too much of nothing? The line is blurred forever.

We hope that tonight’s episode is the end of a great chapter in comedy history, and not the end of an era.

Larry David’s been Dubersteining all of us for 20 years. Why stop now?
Posted by BACKTIME at 1:35 PM