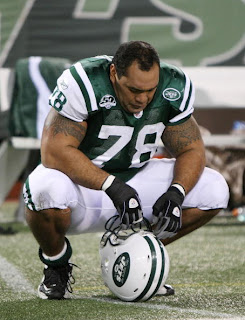 This has been the mantra of the Jet fan for the last 40 years. A stretch in which they’ve had fewer playoff wins (6) than head coaches (12).

You can change the coach, the culture, the QB, the uniform, the attitude. But the Jets still find unbelievably inventive ways to lose. This week, it was Maurice Jones-Drew sliding down just short of the goal line so the Jaguars could drain the remaining seconds and kick the game-winning FG, which was really essentially an extra point.

You could make the argument during the Jets' 40 years wandering in the desert, that for Bill Parcells’ 3 years in charge the Jets had turned the corner for the turn of the century and were headed in a more positive direction.

Year 2, 1998 – Took the Jets to the AFC Championship game. Had a 10-point lead before succumbing to eventual Super Bowl champion Denver. Enough said.

Year 3, 1999 – After Vinnie Testaverde tears his Achilles tendon in the opener, the Jets start 1-6. But behind 3rd string QB Ray Lucas, the Jets (who had nothing to play for) won 7 of their last 9, beating 5 playoff teams down the stretch to finish 8-8. It was as inspired as I had ever been as a Jet fan.

If Bill Parcells walked up to my front door and told me to “run up that hill!” I would have said “Yes sir!” But Parcells didn’t come to my front door, he walked out the Jets back door in the face of an ownership change.

Parcells installed Bill Belichick as Head Coach, and that lasted 1 day. Belichick took Charlie Weis up to New England and won 3 Super Bowls. But the Jets reverted to that same old script.

Jets fans are generally a pessimistic lot, but my outlook is tempered because I’m still basking in some New York Yankees afterglow, so I gave the Jets and Rex Ryan and Mark Sanchez plenty of slack early.

But halfway through the season, the Jets were 4-4. They were coming off a bye week, and had finally put away those dumb throwback jerseys. I had been tough on their wins, thinking about what they needed to shore up. And I had seen hope in their losses, knowing the razor-thin margin between their .500 start and being 7-1. And star players like Kris Jenkins and Leon Washington were gone for the year.
But now it’s mid-November and as long as you’re still competitive (unlike Eric Mangini’s pitiful Browns), it only matters if you win or lose.

And Jets fans had their hearts broken again. Next stop for the 4-5 Jets...Foxboro. Maybe the Jets can summon a late-game stop, a mistake-free QB performance, or a big play on special teams (god forbid). They'll sweep the Patriots and climb right back into the playoff picture when they return to Jersey. But they probably won't.

"Is a dream a lie if it don't come true, or is there something worse?" Bruce Springsteen, The River