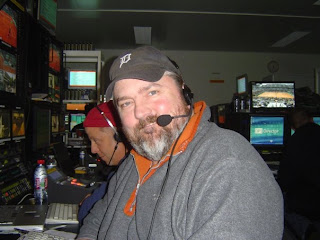 Our friend Rob Green has passed away at 47 years young. Thanks to Bob Borts for furnishing this iconic picture of Rob captaining a TV tape room with his trademark Detroit Tigers hat.

I had lunch with Rob on Saturday, just about 3 hours to kickoff at Wake Forest University. He was himself, bitching about Tim McCarver's World Series commentary, recalling classic movie lines and favorite Kids in the Hall sketches. He was fired up about his Central Michigan Chippewas taking on BC later that afternoon.

I even tried to rope him into working the Detroit Bowl game the day after Christmas. He asked if I was going to pay for his divorce.

On this day he was also complaining of excruciating back pain, that had been with him for weeks. As a free-lancer, he was (as most of us are) afraid to go to a doctor because he was under-insured and he needed to keep working.

A couple of hours later he was suffering from chest pains and EMTs came to the truck to take him to the hospital.

Two days later, he had surgery in response to a brain hemorrhage. He made it through the procedure, but died during recovery.

He was a cantankerous sort, just gruff enough to be beloved by so many. A true character in a business filled with them.

I didn't know him as well as a lot of people I work with, but I did live in Michigan for 3 years and we crossed paths there and everywhere. I was proud to be one of his 463 Facebook friends and I will miss his frequent status updates featuring rock'n'roll song lyrics.

RIP Greener. I will rock my infamous green corduroys today in your honor.