For the first two seasons of TV's best drama, the show was the first to really reflect the times. Think about "Happy Days" turned on its ear. If you were a white man, it was your world, whether you wanted it or not. If you were a woman, a minority, a homosexual, you were limited and repressed.

Mad Men actually seemed dark and heart-breaking until Sam Mendes' 2008 film Revolutionary Road really delved into living the Great American lie that existed almost two generations ago. So I think season 3 is off to a brighter start. 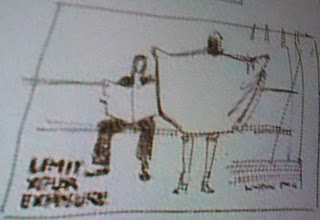 Mad Men creator Matthew Weiner took his Sopranos background into this project. Don Draper was the powerful, miserable Tony Soprano-type. And his wife Betty was the unfulfilled housewife with all the material goodies and all of the frustration of Carmela Soprano.

And like The Sopranos, while the main character drives the series, the colorful ensemble is what makes it so rich and deep. And when season 2 got underway, in very Soprano-esque fashion, we got the scoop on where all the characters were in their lives.

In this season opener, there was less "exposure" and more storylines.

The new London management of Sterling-Cooper has everyone on edge that they might be fired. Or pitted into a winner-take-all power struggle, like Campbell and Cosgrove sharing the position of head of accounts.

Salvatore Romano is outed after his first same-sex dalliance is interrupted by a hotel fire alarm, as is Don's effortless tryst with a sexy stewardess. Funny how seriously people took fire alarms back then.

And Don is still conflicted with "the lie," his idyllic suburban family life with a beautiful wife, two kids and a third on the way. Or is he really just the slick, self-absorbed pitch man who takes whatever he wants.

On the flight back from Baltimore, Don and Sal had the conversation that wrapped everything into a neat fortune cookie. The ad for London Fog raincoats: "Limit your exposure."

But even better, there was no cursory character development. There's a whole season to see what's going on with Peggy and her child, or Kinsey's foray into the civil rights movement. Or Joan's own lie with her very flawed heartthrob doctor fiance/husband.

Basically the debut of Season 3 was a major success, because there was plenty to sink our teeth into, but left us wanting more. Isn't that what advertising's all about?