The In-Law caravan hit town on Friday, so I got a 48-hour pass. I pretty much drove as far as you can in one day without losing one's mind to one of my favorite work destinations...Louisville, KY.

It's a great sports town: College Basketball is awesome. College Football was great too (at least while Petrino was here). Horse Racing is huge. The Muhammad Ali Center. Triple-A Baseball.

Now I'm here on leisure, and this post was supposed to be about adventures on the road and in town. But my trip to Churchill Downs gave me a lot of perspective. 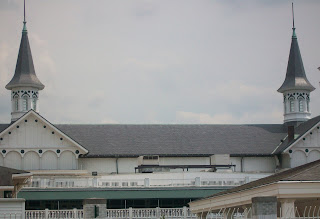 There was no racing here today, its season is over. But they host daily simulcasts here. When I showed up late afternoon, I soon realized that this is one of the biggest racing weekends of the year. 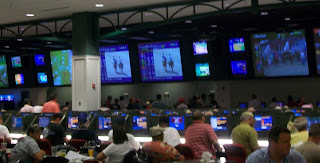 I was following the card at Saratoga "The August place to be" (maybe next year - that's too long a drive), and getting ready for the feature, The Jim Dandy.

All of a sudden the place was buzzing, then roaring. Kentucky Derby winner Mine That Bird, based in Churchill Downs, was being challenged in his return in West Virginia. The hometown hero was the victim of a huge upset to Soul Warrior, a 24-1 shot. Everyone knew what was going on, and some were taking it pretty hard.

I hit with Kensei (over favorite Charitable Man) in the Jim Dandy and had him coupled in the late double, minimizing the deficit for the day.

On my way out, I heard people talking about Preakness champ Rachel Alexandra and Belmont champ Summer Bird going at it tomorrow in the Haskell at Monmouth Park. And I thought to myself, why didn't I know any of this.

Obviously I have more responsibilities now than when I was a single guy on my Upper West Side couch, but it wasn't just that. It was right there in the Daily Racing Form.

"This weekend may represent an all-time low in racing's national visibility. Even as coverage has waned over the last two decades, there was a good chance that someone would find a way to get national exposure for the winner of a Triple Crown race..."

And it makes me realize a pattern here. I've written posts just like this about hockey, tennis, and boxing in just the past few months. The sports that I grew up with are now just niche.