Plenty of Fight in the Yankees

The Yanks had been 0-for-8 against the Red Sox this season, but still had a 2.5 game lead in the AL East. Obviously the streak had to end some time, but I was intrigued that if the Yanks remained winless against their main rivals all season, 0-19, whether they could still win the division.

Well tonight the Bombers got off the mat and were inspired by some fighting spirit. “The Greatest” Muhammad Ali was on-hand to throw out the first pitch.

And they were further bolstered by the presence of Butchie the Boxer (from Pulp Fiction), who wouldn’t take the dive.

They must have channeled those fists into their bats. 13 Runs, 18 Hits, 4 Home Runs. 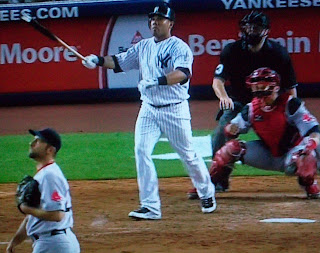 The biggest was by The Amazing Melky Cabrera, whose 3-run bomb off of John Smoltz opened the floodgates in a rout over the Sox.

It is possible that the Pinstripes could lead the division by over 6 games by Monday. Every year the gloom-and-doomers call for the manager's head and they want to run A-Rod out of town. But it's a long season.
And along those lines, Boston could be in a virtual tie for 1st place come Monday. But right now they don't have that winning look. The Yankees certainly do.
Posted by BACKTIME at 11:00 PM