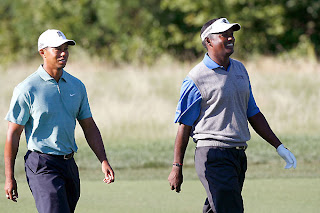 ...What were you waiting for - a punchline? The joke's on the field as Saturday's final pairing has combined for $150 Million in career earnings.

Tiger Woods is halfway home to his 15th Major and 5th PGA Championship. He leads by four in front of a quintet of international elites, including Vijay Singh, Padraig Harrington, and US Open Champ Lucas Glover.

Tiger and Vijay go off at 2:40 ET. Perspective will be offered throughout the day. Let's not call it a LiveBlog, because if Tiger takes off and hides there's more pressing housework to be done. Check back for updates.

7:00 ET Final thoughts. Tiger entered the weekend with a 4-shot lead and I'm sure he would have signed for a 70-72 today. Sure enough he shot 71, and still leads by two at -8. He didn't play great, but he played smart. What else would you expect? Harrington and Yang are the challengers. Glover and Stenson are both Top 20 players and they are 4 shots behind.

6:35 ET Harrington's first bogey of the day comes at #18. That means Yang (-6) will be in the final pairing with Tiger tomorrow (unless Tiger drops two shots coming in). What Tiger does on 17 & 18 will likely determine whether or not tomorrow is a mere formality. His approach on 17 was very average.

5:55 ET Despite a par on the par-5 15th, Harrington looks to be playing with a lot of confidence. But Tiger answered with a long putt for birdie on the short 14th. Woods now has the outright lead, the only player to have it today.

5:45 ET While Tiger has let the field back in, he isn't doing anything to lose this tournament. Still even through 13 holes, he is rarely in birdie position, but never in trouble. Els just bogied #16, so he will drop two back.

5:33 ET The dirty rice with andouille sausage, turkey bacon, and bell peppers never disappoints. And it would seem that Paddy doesn't either. Harrington is now -4 on the day, -7 overall after a birdie on #14. Tiger finally has company at the top. And Els and Yang each connected on birdie putts. They're each just one shot back.

5:00 ET A couple of upsets. Not only is the playroom clean and the dirty rice ready, but Harrington birdied #11 to get within one. Els and Kjeldsen both with clutch par saves at the tough par-3 13th.

4:48 ET While Glover and Kjeldsen falter, Henrik Stenson has moved to -4, and Ernie Els (!) is storming the back nine, now tied with Harrington for 2nd. Tiger grinds along. With a 4-stroke lead going into the day, he'd probably be just fine with a 72 but plenty of golf left.

4:38 ET It should be noted at this point that Vijay Singh's eagle was on a chip-in, because he can't make anything with his putter. Tiger finished the front nine even for the day, but still two in front of Harrington, Glover, and birdie machine Soren Kjeldsen. Nobody has gotten within one yet.

4:15 ET OK, this is officially interesting. Harrington got a second straight birdie on #8 and knocked it close on #9. Glover birdied #7, and Vijay eagled it. While Tiger looks like he'll have to settle for par. He's still 2 ahead, but he isn't pulling away. In fact just the opposite.

4:02 ET Yang missed a great birdie chance on #10, but Tiger missed on his opportunity on #6. Maybe the question isn't if anyone can catch Tiger, but can anyone get within 2 shots? Singh and Westwood are self-destructing. Harrington made bird on the par-5 7th, and he joins Glover three behind. You feel like it's destined to be Harrington to ultimately test Woods' supremacy.

3:49 ET Vijay's approach on #5 was awfully tight, but he missed the putt. Tiger scrambled for par. Y.E. Yang and Lee Westwood each made birdies and they join Glover at -4, three back.

3:35 ET Tiger's par putt on #4 went most of the way down before lipping out. 3 putts and even on the day, still 3 clear. If Tiger doesn't get too far away, look out for Henrik Stenson who is -3 on the back nine.

3:22 ET Tiger and Vijay both made par on the par-5 3rd, despite making seemingly perfect birdie putts. Tiger did make birdie on #2, so he's at -8, leading Glover by 4.

3:00 ET Torrential rain has knocked out my satellite feed, though it is my understanding that Tiger parred #1 while Glover made birdie on #2. Tiger by 3.
Posted by BACKTIME at 2:01 PM