You have Brett Favre as your Quarterback. Mazel Tov. When you celebrate his 40th birthday on October 10, you can revisit the highlights of his career:

>His one Super Bowl title, 13 seasons ago.
>His 12 Postseason wins (only 3 this decade).
>His 269 straight starts (he'll play even when he's hurt, costing the Jets the playoffs).

Brett Favre will take the field tonight in purple, and we have not changed our stance from earlier this off-season. Below is "A Wing and a Prayer: Buyer Beware" (a Backtime Re-Air).
May 12, 2009 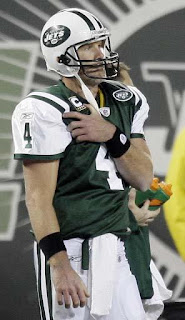 In 2008, the New York Jets and their fans experienced the career of Brett Favre in a microcosm.

There were the dramatic inconsistencies in a 3-3 start.

There was the spectacular run of 5 straight wins, including huge character checks in wins at New England and Tennessee.

There was the monumental collapse down the stretch as the Jets lost 4 of their last 5 including embarrassing losses to San Francisco and Seattle.

When the Jets sputtered to the season's finish line, Favre's decisions were horrible. He threw 2 TD and 9 picks. He clearly was having arm problems, but the Jets couldn't sit him, and he surely wouldn't sit himself. He had a consecutive games streak to maintain.

Brett Favre was bigger than the team. In the one sport in which that premise is certain to fail every time. Brett Favre was going to gut it out on the field to service his own pride. A quarterback with a weak wing doesn't rally teammates, it hands games to the opponent.

Brett Favre may be a warrior, but he's not a winner. Not at this stage of his career anyway.

Now he's flirting with coming back again. This off-season tap dance is a rite of summer and is very reminiscent of Roger Clemens' act through the last few years of his career. He gets his very own spotlight, negotiating platform, and ESPN beat reporter.

And why is he coming back? To stick it to the Packers. The team that gave him all the patience and leverage that Favre required until they no longer wanted to cooperate. Good motivation, revenge. Against your former coaches and teammates that backed you all along. I guess you need an edge when you get to a certain age.

The Jets' opening game against Miami last season tells you everything you need to know. After the Jets' 20-14 win, the TV cameras were all over Favre as the game ended - he got a handshake here and there, but he was still a stranger on the Jets. Favre's teammates all were eager to hug and offer best wishes to the opposing QB, former Jet Chad Pennington, who was heroic in defeat.

Pennington's Dolphins would later win the AFC East at the hands of the Jets. He got his revenge, but wouldn't claim it against the guys he fought with for so long.

Will the Packers be as excited to embrace Brett Favre after the first Vikings/Packers meeting in '09? Not likely.

You see, Brett Favre's teammates, both past and present, know that they're just extras in a one-man show.
Posted by BACKTIME at 1:46 PM