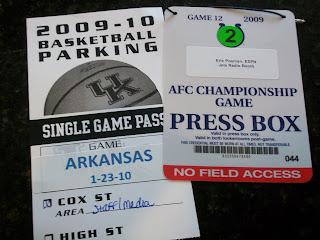 It was the culmination of an all-time sports week, whether I had to work or not. First Allen Fieldhouse on Wednesday, then Rupp Arena on Saturday. They are two of the meccas of college hoops, and currently house the top two teams in the nation as well.

While I take the history of Kansas' home court above all others, Kentucky's home is something to behold for other reasons. The deluge of blue all day along is unrelenting - from the food court to the convention center to the Hyatt, which are all connected to Rupp. And they are real fans that have been born into the tradition and the passion ("Bluebloods?").

On Saturday, the Wildcats took on historic rival Arkansas, who is a little down this year. Kentucky led 10-0 and never looked back. They even led 71-29 at one point, and nobody left - even after a resounding victory that launched the unbeaten 'Cats to the #1 ranking. 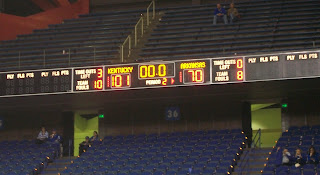 ...And the crowd still wouldn't leave. The below picture was taken after the blowout win as the masses stayed to watch Coach Calipari on the Big Blue postgame radio show. 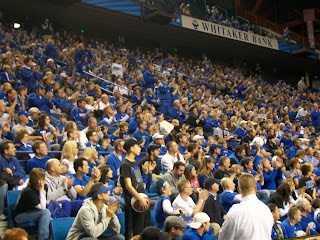 After a terrific dinner at Pazzo's, I woke up the next morning and piled all my stuff in for my 3-hour pilgrimage from Lexington to Indy, where I was certain to see a lot more blue at the AFC Championship game. My sub-standard Ford Focus rental had Sirius Radio but no cruise control.

It rained for the majority of my ride, but after I parked strategically (for my postgame getaway - a learned trait in all TV production types), and I took the bright sun emerging over the enemy battleground as a great sign. 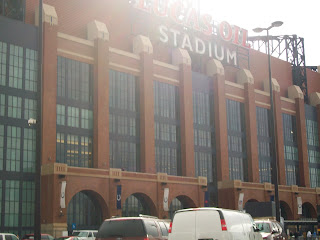 And there were a ton of Jet jerseys out on the street. The New York/New Jersey/Long Island posse represented well in Indianapolis. They all, much like Rex Ryan and myself were feeling giddy about our chances.

It's a beautiful new stadium, and I perched myself in the Jets radio booth - miles above sea level, but dead-center. 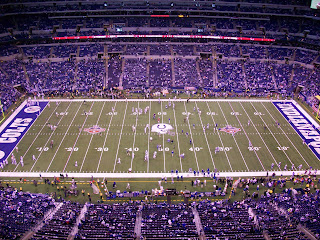 The rule is no cheering in the press box, but I didn't stand a chance. After some early pressure on Peyton Manning and some great play calls by Brian Schottenheimer, the Jets had a 17-6 lead. I had dreams of going straight from my Gainesville game on Feb. 6 straight to Miami for Super Bowl XLIV, though I would not speak of it.

But it ultimately didn't matter what I did or said, it was about what Peyton Manning did and said, in a clinic on how to play QB on the biggest stage.

The Jets' run was epic, but it was over - much like my week on hallowed sports ground.