College Football. Where passions begin at such a young age, and lines are drawn in the sand. 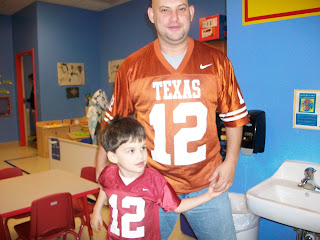 In this case, it's the McElroys against the McCoys. Son sports the colors of his mom's alma mater while I choose the colors of my adopted one. Or at least one of them - you can include Kansas, Wisconsin, Michigan State, Clemson, and even Auburn (yes I said it!) as great places where I've logged enough work and play hours to put towards an honorary degree.

But we'll put the family battle aside. My wife will be at work, and my son will be asleep. This is about validation for both the 2008 and 2009 Longhorns.

Last year's team was denied the opportunity to represent the Big 12 South in the conference title game despite a win over Oklahoma and a loss on the last play to Texas Tech. It's the only blemish in 2 years against Colt McCoy's 25-1 record as a starter.

McCoy lost out on the Heisman this year to Alabama's Mark Ingram, mostly because he was made to look very mediocre against a Nebraska defense that validated itself by shutting out one of the Pac-10's top offenses in a 33-0 rout of Arizona in the Holiday Bowl.

Alabama's real difference-maker won't be Ingram in this game, but rather QB Greg McElroy. The kid form Southlake Carroll threw only 4 INTs and was sacked only 13 times in 13 games in his first year as a starter.

And Alabama has (sigh) the best coach in college football, there's really no doubt about it. But that's kind of the point. Nick Saban, known in some TV production circles as "The Nicktator" has coached B+ talent onto an A+ season. Texas has the A+ talent. McElroy couldn't go to Texas because he wouldn't play there.

But coaching is overrated, right? Just a few years ago, Mack Brown couldn't win the big one. Now he's looking at a twin for the Texas trophy case.