Breaking Bad: Back To Business?

The new season's second episode still was dealing with the clean up of last season's loose ends. Now it seems everyone is in a position to look forward.

The fallout of multinational "concern" Madrigal's financing of Gus Fring's Los Pollos Hermanos franchise reached the top as the company's CEO offed himself in the opening scene. 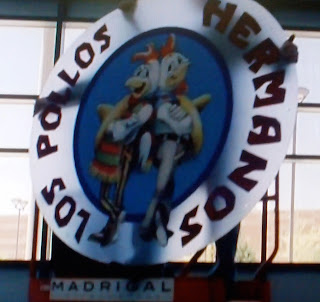 When Madrigal brass came to Albuquerque to meet DEA, they promised transparency in the investigation. Though we are introduced to a Brooks Brothers lawyer, Lydia (as opposed to Bus Stop lawyer Saul Goodman) who is more determined to eliminate loose ends.

Meanwhile Walt continues his ruse with Jessie that the poison-laced cigarette is still out there. And as always brilliantly handled by the show's producers, it isn't done in live back-and-forth conversation. Their talk is played as voice-over as Walt prepares a fake and hides the real one. And they aggressively tear up Jesse's house with Walt pretending to discover it, all to the driving music of "Stay On The Outside" by Whitey.

When they decide that they need to resume cooking (Walt needs to - he's at a net loss after Skylar bailed out Beneke for the IRS), they try to entice Mike to be an equal partner, since they need him for logistics, distribution, and a "steady supply of precursor." Precursor represents the materials and chemicals needed to synthesize crystal meth. 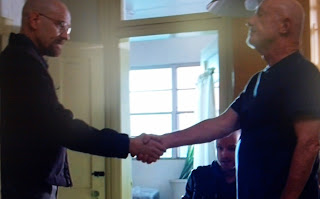 Mike says thanks but no thanks. As he rightly points out, Walt is a time bomb.

Except that the scientific stunt that erased Gus' laptop in evidence control in Episode 1 also broke a photograph that revealed Gus' off-shore bank codes which the DEA has now promised to seize. That eliminates the financial safety net for Mike (set aside for his granddaughter) and "his guys." Which means they may talk, which means Lydia will try to have them killed. But she didn't finish off Mike, and he tortures himself about whether or not to murder her and orphan her daughter. 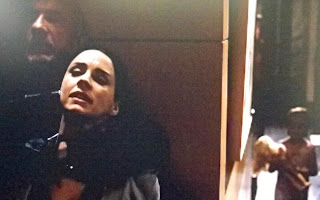 So Mike trades her life back for "precursor" since he's going to need money too.

ASAC Merkert shakes his head to Hank that he couldn't believe Gus was under his nose the whole time and didn't see it. Did it make Hank think of Walt?

Skylar is terrified of the man Walt has become too, realizing the scope and reach of what he's capable of, and what he's made her do.

Season 5 is heading towards Murder On The Orient Express, where everyone has a motive. Mike sees Walt as too much trouble. Hank doesn't have his finger on Walt, but may be ready to confront him. Walt's wife can't breathe around him.

But I still think the show's creators haven't underplayed this by accident. It's going to be Walt vs Jesse to finish off this "split" final season in 2013.
Posted by BACKTIME at 12:17 PM