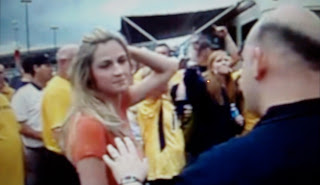 A friend recently alerted me to a You Tube video from a September 2007 West Virginia pre-game.  I didn't know it existed, much less the tally of almost 500K hits. The last 10 seconds or so captures an inaudible conversation between the reporter and the producer.

The still I grabbed doesn't catch Erin Andrews' best look, though it is the best side of the Head Of Backtime. But what's with the wedding ring and the watch? It wasn't that long ago, was it?

I don't remember the particular conversation, but it's pretty likely I was conferring with Erin to redo her report. Not that she did anything wrong - it was the blurting out of "Yeah thick ones Georgie!" from the background.

And while I don't remember that precise moment, I do remember that day. Normally Bubba would be out with Erin and Wade Hewitt (camera) for pre-game GameDay reports. The late morning crowd in Morgantown was a little saucy, and I must have thought we needed to double our efforts. I assure you the folks in yellow were not security. This was before EA got her own secret service squad a couple years later.

I also remember on more than one occasion telling some mouth-breather calling out names or taking inappropriate cell phone pics to "Be Respectful!" of a reporter and a lady trying to do her job.

Earlier this month, Erin changed networks. She will get more hosting duties and likely substantially more money. I don't know if I'll ever work with her again, but I enjoyed our time on college football.

I'm not going to lie, she brought some drama and gossip to the table - I'm averse to both. And she was road-weary, coming from a Thursday night game to a Saturday noon game. And as is the case with female talent (believe me I know), she was obsessed about her weight (we should all have such problems). Though she ate like a man when the situation called.

But when it came down to it, for 3+ hours on the air each week she was the ideal sideline reporter. She was exactly where she was supposed to be. She didn't care how much she got on the air, and she kept her reports concise. And she worked herself into a great interviewer - especially the quick coach hits.

Whether she can transition from all-star reporter into a host will be a challenge. But at least she's taking on the challenge. Some people still just rely on their awesome-looking back of their head.
Posted by BACKTIME at 2:44 PM