After a exhaustive and thorough post-mortem on The Freeh Report, it's time to return to my favorite criminal activities, fictional ones. Breaking Bad is back and like a huge magnet, it draws the polar opposites back together. 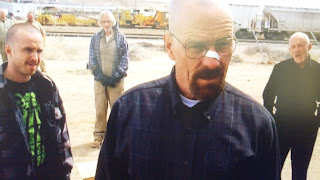 As a season opener generally does, it sets up more story than it provides. This contrasts with last season's premiere which featured a memorable scene involving the now deceased Gustavo Fring, a box-cutter, and an associate's throat.

The opening scene jumps about a year ahead. Walt's got a new name, New Hampshire plates, and a high-powered assault weapon. The title of the episode "Live Free Or Die" (the New Hampshire state motto) would be cute and apropos, except it was already used in The Sopranos when Vito Spatafore was outed at a gay club and broke north, ultimately hooking up with a New Hampshire firefighter.

The episode itself shifts back to the aftermath of Gus' demise. Walt has sold Jesse and somehow convinced Mike on the clean-up, a high-risk, low-probability use of a super magnet to infiltrate a guarded Albuquerque Police Department evidence room.

One of the trademarks of Breaking Bad, what separates this show from other one-hour dramas, is that the great acting isn't cluttered with a bunch of monologues by the main characters. Facial expressions do the exposition work of a good two pages of clever back-and-forth banter. 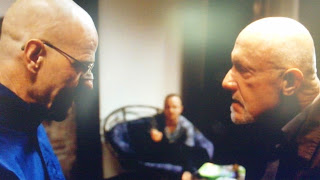 Mike is the exception. His old Irish curmudgeonly ways fit well. And he gets a pass from his exceptional breakout as Frank McPike in Wiseguy, the first great Mob series. His exchanges with Walt are real and anecdotal (remember Half-Measures?) and illuminating, even though they're a little long.

Meanwhile, Skyler White has very much established herself as a co-kingpin. With (somewhat) more humanity that Walt, she is the one moving the pieces on the chessboard while Walt has become the bull in the china shop, relying on pure intimidation. 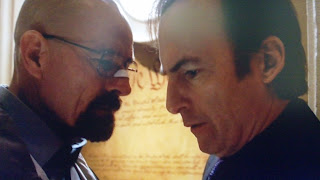 Skyler has become the one that Saul Goodman turns to when even a shady lawyer finds himself in an ethical quandary. And she's the one who makes sure that Ted Beneke doesn't talk.

We were sure that Ted was dead, right? Turns out he's just badly injured, and just another good-looking bald man in Season 5. 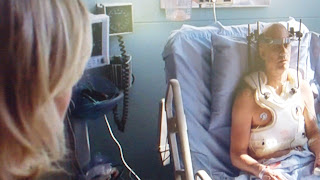 As Skyler and Walt now have similar levels of accountability in the scheme, expect that they will repel each other as similar ends of a magnet would.

As season 5 continues on, I expect this will eventually all lead to the foreshadowed war. But I think it will be Walt vs Jesse, who was way too even keeled right out of the box.

And there's the business of business. Walt and Jesse need a new lab and a new distributor.

I was happy to see that AMC wasn't one of the channels on the DirecTV chopping block. The relief will be short-lived if the Viacom deal isn't worked out by the time the Colbert Report returns tonight.
Posted by BACKTIME at 5:11 PM