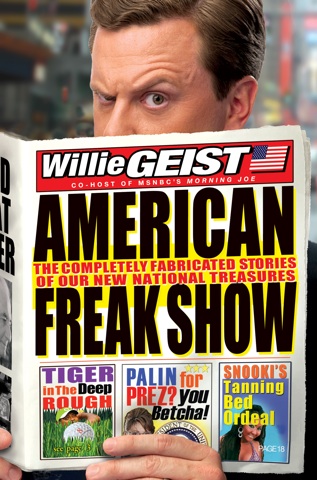 The 24-hour news cycle. America's tabloid obsession. Reality show mayhem. It's all put on a pedestal, fashioned hilariously by Willie Geist in 2010.

As the backbone and bullshit police of Morning Joe, Geist is able to handle the hard news and hold his own one-liners with the regular roundtable of pundits that yap for a living.

The book, American Freak Show: The Completely Fabricated Stories of our New National Treasures, takes the news part out of the equation.

And Geist isn't what you'd expect. You might think high-brow, northeast/Vandy elitist humor. But it's really a lot more crude, descending on slapstick. There are a few eyerolls, but plenty that is laugh-out-loud while idling in the school pickup lane.

The first chapter envisions Sarah Palin's presidential inauguration at a WWE event in Tampa with the reception at Dave & Busters.

And some of the other chapter titles speak for themselves.

5. Obama vs Cheney: Late Night in the White House Kitchen

Of all the people lampooned in the book, nobody is as sympathetic and heart-warming as Rod Blagojevich, who had put Obama's senate seat on Craiglist. Yes Blago is on an FBI tape, offering a Little Caesers employee a high-ranking job in the Department of Sanitation in exchange for free crazy bread. All while using f**k in every fourth word.

My favorite "skit" was The Bachelorette: A Vote For Love. It's 25 politicians vying for the love of Heather, and it coming down to Mark Sanford and Eliot Spitzer.

Sanford of course goes with the "soulmate" angle, offering his devotion and quoting Grey's Anatomy. But she ultimately chooses Spitzer because he tried to pay her the first time, they did it once in a hot-air balloon, and they share the same safe word "Beowulf!" Of course Spitzer dumps her right after she chooses him.

Then my favorite line teases the next season on The Bachelor, "when we finally cut the pretense and round up a bunch of strippers, put them in bikinis, pump them full of pills and vodka, and let them wrestle in tapioca pudding for the heart of a single dad." That's when I knew we were on the same wavelength.

Unfortunately, Geist's 2011 follow-up, Loaded! Become A Millionaire Overnight and Lose 20 Pounds in 2 Weeks or Your Money Back, is just foolish. It tries to do the same thing with financial advice as Freak Show does with pop culture, but they (co-written with Boyd McDonnell) are out of good material after about 15 pages. Blago would've hung up on them.
Posted by BACKTIME at 11:00 PM