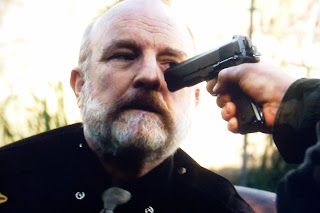 The FX drama Justified  is a wildly entertaining product though somewhat flawed. The dialogue is great, but great too often. It's what makes Elmore Leonard novels laugh-out-loud thrillers, but on TV you need good, developed characters and even better actors to pull off all the smart mouthing.

Deputy Marshall Rachel Brooks is terrible. That insidious Colton, the junky ex-military henchman is a waste of space - he doesn't even hold a cigarette right. And (dare I say it) I'm tired of Boyd Crowder trying to do Hamlet in every scene.

However, every conversation Raylan has with his boss Art Mullen is priceless.

When Drew Thompson (the Keyser Soze of Kentucky) eludes authorities yet again with the assistance of a small-town whore who has major info on the Crowders, Raylan suggests bringing in the state troopers on the manhunt. Art goes off on a major rant, one for the history books: 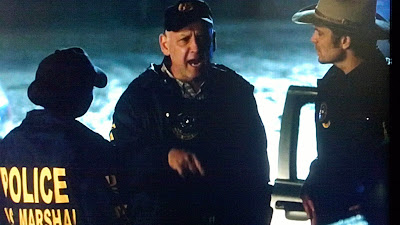 "The first thing we're gonna do is we're gonna acknowledge that this guy's awesome...I mean he shoots Theo Tonin, fakes his own death in a spectacular fashion, pushes a guy out of an airplane while he's flying it, parachutes into Harlan County with enough coke and cash to jumpstart the economy of a small country, and then he has the balls to get a job in law enforcement not once but two times...He spends a couple of days riding around with you (Raylan) while you're looking for him. And now he's run off with a hooker that's half his age. That's some badass shit."

Raylan echoes "That's pretty badass." The "sir" was implied. Art's point is that the Marshall's service need to be the ones to corral one of the greatest fugitives eastern Kentucky has ever known.

And that brings all the old gang out. Wynn Duffy, Elston Limehouse, some Detroit gangsters in a helicopter, and poor "small-time asshole" Johnny Crowder playing triple-agent.

It's an intricate web involving people who are incredibly cagey, yet exceptionally dumb at the same time. It's a winner and a loser all in one. In short, can't-miss television.
Posted by BACKTIME at 11:14 PM