Breaking the Mold of the TV Drama 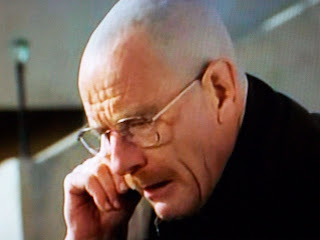 
AMC is now officially a resounding 2-for-2. The basic cable movie channel's foray into dramatic series has been a smashing success.

First Matthew Weiner (Sopranos producer) created "Mad Men," the life and times of a Madison Avenue ad agency in the early 1960s. It's so real you cringe at the constant barrage of sexual, ethnic, and racial discrimination. And you can smell the Lucky Strikes in the air.

Then as a follow-up, AMC released "Breaking Bad," created by Vince Gilligan (X-Files).

Now in Season 2, it's just your average story of frustrated, middle-aged high school chemistry teacher Walter White (Bryan Cranston). After learning he has late-stage lung cancer, Walt decides to use his chemistry expertise to create the purest form of crystal meth on the market. He does this all behind his family's back to finance his radical cancer treatment and provide for his family's future, which just introduced a newborn baby girl.

But Walt is a square. And even though he may have the criminal instincts to pull it off, he doesn't have the connections or the know-how. That's where Jesse Pinkman (Aaron Paul) comes in, Walt's partner and former drop-out student. Though the two of them are completely different personalities, the scenes they're together in explode with...chemistry.

And their fortunes change constantly, whether it be through their brilliance, incompetence, or sheer luck - good or bad, leaving the viewer unprepared for the next plot twist.

While they're just a chemistry teacher and small-time drug dealer to start, they've advanced quickly up the food chain and left a number of bodies in their wake: Emilio, Krazy 8, Tuco, Spooge, Combo, and Jane (did not see that one coming).

So the stakes are at a fever pitch as Walt tells lie after lie to deceive his wife and Jesse reaches a drug-addled rock bottom since these deaths are crippling his soul.

All that plus some massive foreshadowing ploys to tease next week's season finale. Six days away, and breaking great.
Posted by BACKTIME at 9:51 PM