Zen and the Art of Winning in the NBA

In a league full of egos, full of players who have had their every need catered to since they were pre-teens, Lakers Coach Phil Jackson has found a way to win 9 championships.

Sure he had Jordan for six of them. Sure he had Shaq and Kobe for the other three. But Jordan had been playing in the NBA for 5 years before winning it all. Shaq and Kobe had played side-by-side for 3 years with nothing to show for it before Jackson hit the west coast. 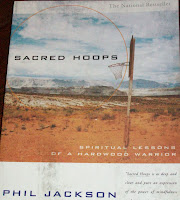 Jackson has been able to merge the super-sized NBA personalities with selfless role players. The result is...harmony. Phil Jackson's 1995 bestseller, Sacred Hoops: Spiritual Lessons of a Hardwood Warrior gets a little long-winded in the philosophical, but there's obviously something to it.

If the basketball "Zen Master" could harness Dennis Rodman for 3 championships, and could find a way for Kobe (ultimate practice player) and Shaq (the opposite) to coexist for as long as they did, then he obviously was able to achieve something that nobody else could.
Jackson throws around terms like serenity, inter-connectivity, and visualization. And he credits longtime assistant Tex Winter's triangle offense as the vehicle for these philosophies. Last month, Winter suffered a stroke at age 87 and will likely only be with the Lakers in spirit for the rest of their 2009 journey.
Nine championships or not, Jackson's accomplishments need to be put in perspective today since he hasn't won since 2002. And now other coaches are pushing him with the same style, that now seem a lot less preachy.

Take Rick Adelman for example. After taking Portland to two NBA Finals, he turned the lowly Sacramento Kings into a powerhouse. And most recently, he took a Houston Rockets team that was missing Tracy McGrady, and then lost Yao Ming and still pushed Jackson's overwhelmingly favored Lakers to a Game 7 in the Western Conference Semifinals.

Adelman has found a sense of harmony as well, taking a loose cannon like Ron Artest and turning him into the ultimate team-first guy.

Next up for Jackson's Lakers is another matchup with an easygoing coach who just wins wherever he goes: George Karl.

Karl took the Sonics to the Finals and then later took the Milwaukee Bucks to one win from it. His latest reclamation project, the Denver Nuggets, is a tribute to his patience to his team's common efforts. It didn't hurt that Allen Iverson (me!) was traded for Chauncey Billups (we) early in this season - Thanks GM Rex Chapman! The result was the Nuggets' best season since their ABA days.
Karl's reign in Denver hasn't been all about harmony. He essentially threw Kenyon Martin off the team during a 2006 playoff series against the Clippers. Many thought they'd be unable to work together again. Though Martin can be described as temperamental, he's also come back from major injuries more than once. Karl recognizes that resiliency and has become a strong advocate.
Karl has molded a complex cast of characters: Carmelo Anthony, JR Smith, Nene, Chris Andersen, and turned them into a cohesive unit.
While Phil Jackson is the architect for how to win with the modern NBA players, Rick Adelman and Geoge Karl have been able to translate similar styles in multiple places. Overall body of work aside, at this moment, they may stand alongside Jackson and not behind him.
Posted by BACKTIME at 9:57 AM