Your most unconventional NBA Finalist? 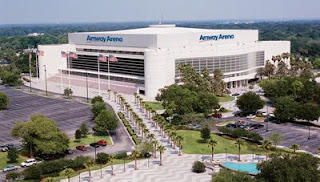 Welcome to Orlando, and the Magic's kingdom, Amway Arena.
And much like the Amway brand, Magic basketball has been snickered at and dismissed, but they are actually a powerhouse.
Mike & Mike on ESPN Radio have been playing up ad nauseum how Shaquille O'Neal called his former coach, current Magic coach Stan Van Gundy "The Master of Panic." And after a couple of head-scratching losses to Boston in the Eastern Semis, Van Gundy himself seemed flustered and was a target for lots of criticism.
But the Magic overcame adversity, winning a Game Seven on the road in the champions' house, and have been the superior team in a very tight Eastern Finals series. They hold a 3-1 lead, but theoretically could have swept already if not for a last second bullseye by the Cleveland LeBrons in Game 2.
But Orlando's team history could have been very different.

Billy Donovan, the head coach of the then 2-time National Champion Florida Gators had taken the Magic job. Then after a quick change of heart, he split and returned to Gainesville, where his team has qualified for back-to-back NITs.
Stan Van Gundy was actually the second choice. He had gotten to the precipice of an NBA Finals with the Miami Heat, then had the rug pulled out from under him (technically he resigned) by team president Pat Riley, who coached Miami to the 2006 NBA title.
Billy Donovan, a college coach decided he didn't fit. And this is not a team that college hoop junkies (like myself) can latch onto. Take the Magic's top 5 guys in scoring this postseason:
Dwight Howard - High School (Atlanta)
Rashard Lewis - High School (Houston)
Hedo Turkoglu - Turkey
Mickael Pietrus - France
Rafer Alston - Fresno State (one year)
It's the kind of roster that keeps Fran Fraschilla up at night cramming for the NBA Draft.
So that's one season of major college basketball amongst them, from the "streetball" legend Alston. In fact, Van Gundy himself had only one season of major college basketball as well - a very forgettable season as the coach of the Wisconsin Badgers in the mid-90s, before Dick Bennett and Bo Ryan made basketball as fashionable as football in Madison.
Yet here the Orlando Magic stand, one game from the NBA Finals. Though there's still work to do, this run isn't going to surprise anyone any longer.
Posted by BACKTIME at 11:18 AM