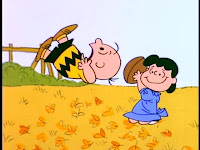 It's always good to have hope, and while change is a big word in Washington, College Football fans will have to keep hoping.


A political circus today on Capitol Hill as the power brokers of college football went before the House Energy and Commerce Committee, trade and consumer protection subcommittee. (And you thought there was bureaucracy in the TV business?)

Entertaining stuff. Lots of good sound bites and quote words for the media to exploit. Representative Joe Barton (R-TX) likened the current system to communism. Rep. Barton is a Republican and a Texas A&M Aggie. Congressman? A penny for your thoughts on this snapshot: 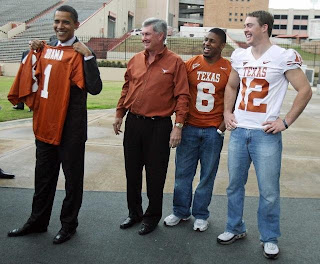 One of my favorite role models is in the picture, and he's not the one you all suspect (you know, the one on the far left). My crew joked with me all year about my "man crush" - that genuine smile - just another reason to love the dreamy #12.

Anyhow, I'm digressing because nothing real was accomplished today in Washington. But if the goal is to have a College Football Championship Playoff sometime in our lifetime, then this is a good first step.

Several months ago I posted an "Open Letter to the President-Elect" (below) and asked for some exploratory hearings on this subject, so I can't complain.

You started this. Your interview with Chris Berman last week seemed innocuous and diverting at the time. But when you said you were in favor of a College Football Playoff, you picked up the political football. Now, we want to see you run with it. You’ve given all college football fans the audacity of hope.

Sports radio has been buzzing about it. Bob Stoops and Pete Carroll both said last week that they think it’s time. Joe Paterno, who has had several unbeaten seasons in which his team didn’t get a chance to be champion, has always been a proponent.

Mr. President-Elect, I know your agenda is filling up by the second. But I don’t think one day of exploratory hearings on Capitol Hill is too much to ask for, at least to start. Any weekday in April of ’09 sounds good.

I’m sure you know, but the last eight years have been hard on all of us:

• In 2001, #1 Nebraska was clobbered in Colorado 62-36 in their regular season finale. They didn’t qualify for the Big 12 Championship, but still got to face Miami in the title game, and were out-classed.

• In 2003, #1 Oklahoma was defeated soundly in the Big 12 Championship game by Kansas State. They were still invited to play for the BCS title against LSU. The Tigers won, and USC was awarded the AP crown.

•2004, Auburn went unbeaten through the grueling SEC season, won their conference championship, and still was on the outside looking in. They completed their perfect season with a Sugar Bowl win over Virginia Tech, but took home no national hardware. Utah finished unblemished as well.

• In 2007, chaos reigned. Teams who had destiny in their hands lost week after week, until LSU emerged as a 2-loss champion. Nobody argued after such a wild ride, but was anyone 100% settled on the final two combatants?

Last week, people turned out in record numbers to vote and have their voices heard. How do you think the people would vote on this issue? Having an unpopular, unfair system in place simply isn’t democratic.

"Yes we can” decide our national champion on the field, not through polls or computers. 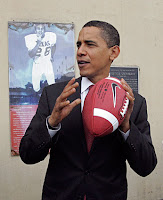 Not too bad. You ask for April, and you can't really complain about May 1st. Maybe he read my letter.