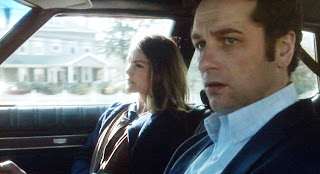 The outstanding season finale of The Americans was a microcosm of the season, where misinformation and spy game scenarios rule the day. But always shining through is our heroic KGB couple on concurrent parallel tracks with each selflessly protecting the other.

There are two missions. The riskier one is to meet with the Air Force Colonel about Reagan's missile defense program, fearing that such a high-level source could very well be a setup. The secondary mission is to pick up the tape of the secretly-recorded meeting between Defense Secretary Caspar Weinberger and James Baker, the White House Chief of Staff. But the Weinberger/Baker meeting is the FBI sting.

"OK so you grab the tape, pick up the kids from school, wait someplace safe while I meet the Colonel."

Phillip and Elizabeth are constantly back-and-forth about who would handle the more dangerous assignment, and who takes the kids to Canada if they're caught. Phillip does the noble thing (he thinks) by assuming the risk without permission, via Dear John note. 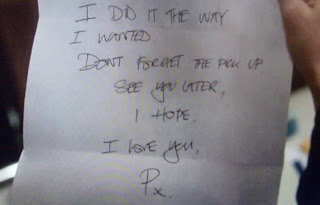 Meanwhile, Nina, the KGB-mole-turned-double agent, has been granted a stay from the center in Moscow. Her job now is to turn FBI Agent Beeman the way he turned her, and she's off to a flying start. She gets the information that the setup is on. 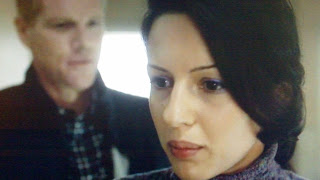 The meeting with The Colonel goes down - and the information is that there's no information. The infamous "Star Wars" program is essentially that - a science fiction fantasy, intended to make the Soviets "spend themselves into oblivion, keeping up with the technology that will never pan out."

But their meeting is interrupted by the KGB Granny (fresh from finishing off CIA middle management guy in a personal vendetta), thinking that was the sting - Phillip doesn't buy it and then realizes what the actual sting is. He heroically rescues Elizabeth and wins a massive Chevy Nova car chase with law enforcement, until he realizes she's shot.

He gets her to the safe house, the FBI is foiled, and the last words of the season are from a critically-wounded Elizabeth to her husband and relentless partner, "Come Home" (in Russian).

Then there's the music video montage updating all the players to Peter Gabriel's thumping Games Without Frontiers. While the end-of-season musical assmeblage may be a little cliche in TV series at this point, it's cliche because it works. I can't remember a David Simon season-ender of The Wire or Treme' without one. And The Americans is just about at that level.
Posted by BACKTIME at 9:47 PM