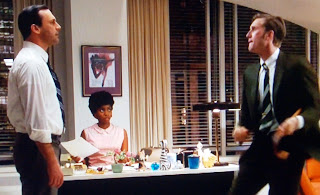 After the gang from SCDP/CGC got a visit from Dr. Feelgood, all trippy hell broke loose for a full June 1968 weekend.

Ken Cosgrove's "It's My Job!" tap dance became an internet sensation, as it should have. I was watching somewhat live and rewound 3 times to believe the television moment I thought I had just witnessed.

Not only did a shot in the ass have Ken's foot feeling all better after his misadventures with the GM suits, but he managed to turn it into a satirical, stage-worthy routine with the cane as a prop. And you had to feel the undertones of a minstrel show with the black secretary Dawn looking on in bewilderment.

But all kinds of things were happening as the office in the Time-Life building turned into Vaudeville. As Rick James once posited on Chappelle's Show, "Cocaine is a helluva drug." I don't know what was in that shot, but it was a helluva drug. It gave Don Draper visions of his very troubled childhood, it made Stan Rizzo a pick-up artist, and it brought the whole gang to Michael Ginsberg's maturity level.

While the episode was entertaining and thought-provoking, as a medicinal journey might advertise (advertising!), it seems like a cheap trick in a tired series.

The Sopranos, from which Mad Men boss Matthew Weiner evolved, was guilty of these types of episodes multiple times. Tony Soprano had hallucinations while in the throes of food poisoning, he had "the test dream," and tripped on acid with a Las Vegas hooker.

Other shows have done it too, and it seems like a ploy from the writers to be outrageous. Drug-enhanced visions have to be added to the criteria for Jumping The Shark.

Don Draper's character has become a little tedious with the flashbacks, the introspection, the women troubles. He will never find peace, not in the late 1960s. Not when his apartment's being robbed because of his carelessness, not when he's ignored his children for a married neighbor.

So where is the show going? What's the next TV writer hook to get us through the next episode? Stay tuned, I guess.
Posted by BACKTIME at 11:50 PM