Lamenting The End Of A Season

There is always great trepidation when a routine is interrupted.

At the end of the baseball season, you wake up and think, "Who's pitching today?" The answer is nobody. The season's over. Watch college basketball.

When I was a kid I hated when summer was over because school was on the horizon. Now as a parent it's much the opposite, you dread the end of the school year as you embark on an unstructured, exhausting and HOT Savannah summer.

When a good book ends, you reach to turn to the next page and there isn't one, except for maybe some boring acknowledgments.

Now I don't want the Cold War to end. Maybe it hasn't - Mitt Romney called Russia our "Number one geopolitical foe" just last year. And maybe there are sleeper Directorate S KGB agents still spying on us now while continuing to masquerade as average Americans.

Regardless, the inside world of Cold War espionage portrayed in The Americans is provocative, delicious, and addicting, and it's hard to believe that season one ends tonight. And expect there to be cliffhanger drama that will keep us salivating for next season.

There are the constant cat-and-mouse KGB/FBI games, and the rising tension/awareness in Phillip and Elizabeth's marriage. The penultimate episode "The Oath" took on both storyline runners brilliantly.

Just when the FBI had been alerted to the bug in Caspar Weinberger's study, Phillip was able to pull off a new bug in the FBI counterintelligence office. How? By marrying the director's secretary as his alter-ego Clark Westerfeld.

Elizabeth was dubious about that possibility, "No knock on your charms there Romeo, there's no way she'll go for that." But Phillip was right, he pulled off a secretive wedding with his fellow agents and masters of disguise appearing as his family. The parents of the bride even commented on the "family resemblance." 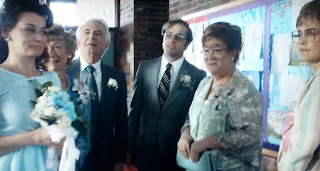 The wedding scene was especially poignant since Phillip and Elizabeth are having their own marital impasse, even though they were never actually married in the first place.

Meanwhile the FBI's main mole, the brilliant and sexy Nina, has found herself moving up the food chain at the KGB to the point of taking an oath of her own. 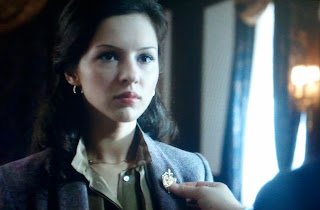 She confesses her sins and throws herself at the mercy of the Rezident, claiming she wants to redeem herself in the eyes of Mother Russia. So now we have a real double agent and she will be handling Agent Beeman rather than the other way around.

The storylines are brilliant, emotional, and building. But that will all come to a halt as the season regrettably concludes this evening.
Posted by BACKTIME at 12:31 PM