The Knoxville Washout: Hours Of My Life I'll Never Have Back 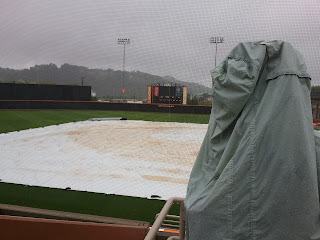 As soon as you mention stealing paychecks (April 7 weblog), it bites you in the ass. Today I got paid to produce a baseball game that was never played, but it doesn't mean I didn't work for it.


I don't think it stopped raining in Knoxville from the moment I arrived Saturday afternoon until the moment I left about 24 hours later.

Once Saturday night's Georgia-Tennessee game was rained out I had to flush out our scenario for Sunday. By SEC rules, if two games need to be played on a getaway day, they play a 7-inning doubleheader. So we were looking at a 7-inning game instead of a 9-inning game at 1 PM Sunday. Unfortunately the forecast called for a 90% chance of rain between Noon and 5 PM.

I also learned that Georgia's baseball team was busing back to Athens rather than taking a charter or a commercial flight, but the Sunday curfew was still in effect since the Dawgs had to get home for finals. This meant no game could start after 4 PM.

So after immersing myself in SEC baseball protocols I headed over to the Tennessee campus to meet 11 Tennessee students who were to take part in our broadcast as part of the ESPNU Campus Connection program.

After that I braved the pouring rain for a fair dinner at Cocoa Moon. But fair dinners don't cut it when you're on the road, and I'm now essentially 0-for-2 in Market Square in Knoxville. But I enjoyed watching Bulls-Nets Game 7 there.

I woke up and arrived at a soggy Lindsey Nelson Stadium for our 6:30 AM call time. The weather and the weather radar were both unforgiving and the field was drenched. But the powers that be refused to call the game, postponing it from 1 PM to 2:00 to 2:30 to 3:30. We were three minutes to going on the air in a downpour before officials made the wise choice and cancelled the game.

We never had a chance to get this one in, and spent 9 hours standing by and dodging raindrops for 5 live updates and no game.

If we were let go in the morning, this game would be under consideration for Grand Theft Paycheck, but the time stole me instead.
Posted by BACKTIME at 10:02 PM