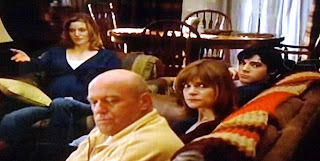 It's the summer television hiatus. The Americans, Game Of Thrones, and Mad Men are done for the season. There is nothing to watch now except for the often frustrating New York Yankees. But there's a light at the end of the tunnel. Breaking Bad returns in 37 days and AMC is re-running every episode in order.

So it gives die-hard viewers a chance to re-live the situation from the beginning, and watch in amazement as the story and characters develop so drastically.

In the show's fifth-ever episode "Gray Matter," we realize why we love the show so much - it's the writing. There is a scene that is dramatic as (almost) any in the series, where an intervention is staged with five people in the White family living room.

There's no meth, no death, and the roles of Saul, Mike, and Gus haven't been introduced. It's one episode before Tuco and the unveiling of "Heisenberg." Walt even has hair. The scene is 11 minutes of talk only, and it starts with Skyler White clenching "the talking pillow." 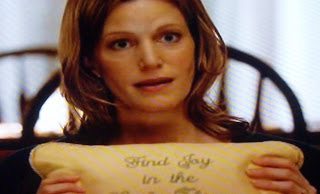 The intervention is for Walt to undergo a debilitating and expensive chemotherapy treatment for his terminal lung cancer, which he is trying desperately to evade. Everyone takes their turn with the pillow and the words are raw and real. Skyler is indignant that Walt fight for his life for the sake of his family, and she gets into a shouting match with her sister, who insists that Walter has the right to make his own choice.

Walt sits quietly while those around him bicker, which is a metaphor for the whole process. Until he is forced to seize the pillow and speak for himself. 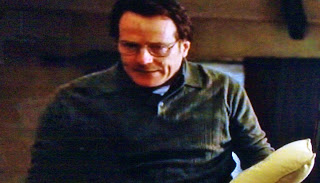 "These doctors, taking about surviving - one year, two years - like it's the only thing that matters. Well what good is it to just survive if I am too sick to work? To enjoy a meal? To make love? For what time I have left I want to live in my own house. I want to sleep in my own bed. I'm not going to choke down 30, 40 pills and lose my hair and lie around too tired to get up, so nauseated I can't even move my head..."

Walt made his stand and made his choice. I choose not to do it. At this point in Walt's mind he had left the meth business behind, having just pocketed a mere few thousand bucks with only a couple of bodies in his wake.

But the next morning he wakes up, hugs his wife and reconsiders. And if you know anything about Walt's character, even just 5 episodes in, he isn't going to take any handouts. He is going to make sure that he is responsible for his treatment and that his family is taken care of.

In the closing scene he appears back in Jesse Pinkman's driveway, "Wanna cook?" That's the moment that Walter White really breaks bad...for good.