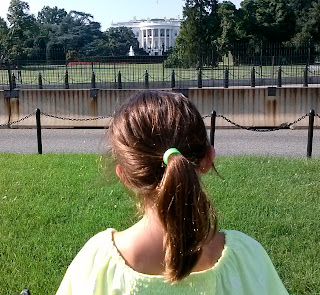 The last time I saw 1600 Pennsylvania Avenue from this angle, it was in flames in the very underrated action flick White House Down. Nothing so dramatic today though it felt like we were on fire touring DC at triple digits Fahrenheit.

We weren't completely outdoors today as we got a tour of the Capitol (White House tours are still sequestered). After reporting to the Hart Senate Office Building, the first body we saw was Senator Ed Markey, looking a little disheveled in the lobby of his new digs - he was just sworn in this morning.

After all those years in Congress, maybe he still needs to check out the Senate library. 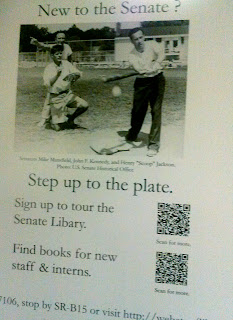 Our semi-private tour was pretty cool. The kids even enjoyed making the rounds. The Capitol is exceptionally preserved, and of course highly secured. My Dad was briefly detoured by Capitol Police for the choice of bug spray in his bag. The only dreadfully boring part was being in the actual senate gallery while there was procedural nothingness going on.

And the above paragraph is a metaphor for Congress itself. But as we take potshots at congressional disfunction, we still are awestruck tourists when we get there up close.
Posted by BACKTIME at 11:32 PM