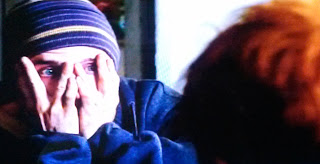 There is no episode of Breaking Bad that ultimately defines the characters of Walt and Jesse more than Season 2's "Peekaboo." Their motivations have been documented, and we know about their lives on the surface. But it's this episode, the 13th in the series' history, that opens up our eyes to what's in their souls. 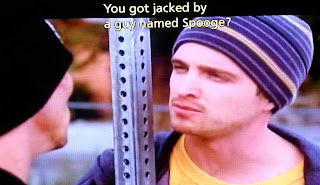 If a subtitle says a thousand words, this is the one. After Skinny Pete got robbed by junkies, Walt told Jesse to "handle it," which meant get back the money or the meth. So Jesse, a paper gangster, goes under the pseudonym "Diesel" to play the tough guy and get retribution from Spooge.

At gunpoint, Jesse gets Mr. & Mrs. Spooge to literally pull the drug bags out of their asses, and realizes there isn't nearly enough.

JESSE: So you hold the crystal and she holds the H, huh?

SPOOGE: Division of labor, yo.

While Jesse is doing the heavy lifting at the Spooge residence, Walt's "division of labor" for the day consists of compounding lies to his family and berating Gretchen Schwartz, his former partner/lover/family friend for no good reason. Unless you consider Walt's hate, spite and envy good reasons. 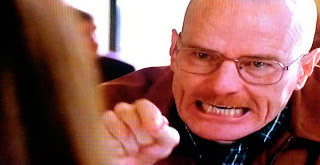 GRETCHEN: Let me just get this straight - Elliott and I offer to pay for your treatment - no strings attached, an offer that still stands by the way. And you turn us down out of pride, whatever? And then you tell your wife that we are in fact paying for your treatment. Without our knowledge, against our will, you involve us in your lie. And you sit here and tell me that is none of my business?

WALT: Yeah. That's pretty much the size of it.

WALT: What would you know about me, Gretchen? What would your presumption be about me, exactly? That I should go begging for your charity? You, waving your checkbook around like some magic wand...

And Walt's bitterness and disdain only gets worse from there culminating with the dropping of an F-bomb on a lady, forcing his former partner/lover/family friend to storm out of the restaurant.

Meanwhile back at the drug den, Jesse loses his focus because of a toddler living there in squalor. He has one eye on the strangers' kid, playing "Peekaboo" when he gets jumped.

But junkies will be junkies. They get high and bicker, and after Spooge calls his woman a "skank" for the umteenth time in a row, she pushes a propped-up ATM on his head, killing him instantly and then resumes getting high.

Jesse works through his shock, wipes down all the traces of his existence, and somehow the ATM unloads for him. He calls 911 as he makes his escape, but remembers...the kid. 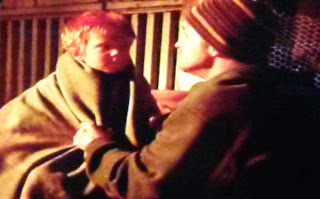 Jesse whisks the kid out of the house so he doesn't witness the horrific scene. Then he engages the kid on the front stoop until he hears the emergency sirens making their way.

"You have a good rest of your life, kid."

And there it is in a nutshell. Jesse cared more for a skank whore's dirty kid than Walt did for a pivotal person in his life. And that's what fans of the show love about it.