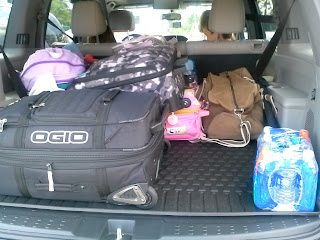 Our last epic family caravan was in 2010, and there's a reason you don't do this type of thing every year.

It's not that the driving is all that bad, what with the built-in entertainment systems, video games and such - it's not your father's road trip.

And the planning is fun. Especially if you're a TV producer type, you love connecting dots and putting a plan on paper and (hopefully) watching it unfold. I've found this type of skill even runs in the family. 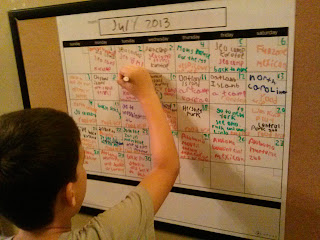 The problem is the anxiety: Do I have everything? You have the list and cross-check it multiple times. It's actually three lists: 1) The Kids 2) Me 3) The House.

But like anything else you read too often, the words just run together. So you think about what's most important: medications, power chargers, your daughter's ponytails, and making sure the trash is thrown out.

Then you have to worry about certain family members that are (ahem) detail-oriented, and whether they got to do everything they had planned before you take the exit ramp onto the interstate.

The 4-hour drive to the hotel in North Charlotte was the easy part. It was far less eventful than my recent attempts to get from Abercorn to the Truman on Anderson Street. But then again, this was only Day 1.
Posted by BACKTIME at 11:43 PM