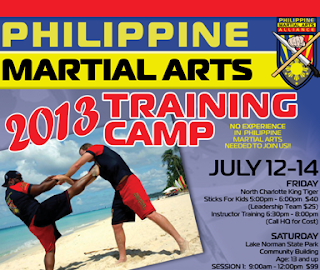 The trip up the east coast went through Charlotte for the one event that belonged to Daddy instead of the kids. Saturday at Lake Norman State Park was Philippine Combatives training, open to the public, featuring the stick guru Master Julius Melegrito.

There was some cloud cover so it wasn't nearly as hot as it could've been but it was ridiculously humid and the bugs were crazy. I found a new purpose for my sticks, swatting mosquitos on my legs, back and neck.

The three-hour session was constant. Master Melegrito engaged his 50 or so students and the experience was fun, informative, sometimes painful, and very humbling. When it was over it was hard to transition to owning regular hands and arms, though they were a lot lighter. Until I had to collect the kids, then my arms became occupied again.

It was a pretty low maintenance rest of the day after an hour-plus drive northeast we had swimming, dinner and a movie. Sagebrush Steakhouse was substantial, economical, and surprisingly delicious. Despicable Me 2 was hilarious.

Shacking up in Asheboro NC. Next stop Virginia. The tour of the sticks continues.
Posted by BACKTIME at 11:48 PM