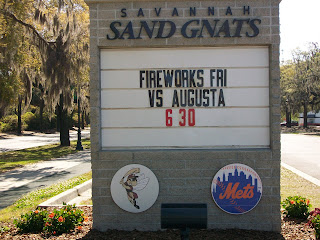 After the Friday Masters coverage concluded, I was one of 2,125 to see the Sand Gnats defeat the Augusta Green Jackets (nice name) for the second straight night. Good A-Ball action too. Gnats got out of a bases-loaded jam in the 8th and ended it on a 6-4-3 DP. Then fireworks.

But it was also Jimmy Buffett night. Temps were in the 60s and breezy, and people were bundled up with blankets and fleeces. I was in my aztec-print beach shirt (the one my wife hates). Changes in latitude, changes in attitude, indeed.

It's Moving Day at Augusta and the latitude lines on the leaderboard will be sure to shift dramatically. History tells us that Saturday at the Masters is a day to try and hold on, and Sunday is when things ease up and you see the fireworks. So for today, if Tiger and Phil shoot around 69 or 70 and go into Sunday around -5, they will be in position to pounce in the final round.

TV coverage begins today at 3:30. Check back for live updates.

What about Tiger and Phil both at -4, seven back? They will tee off together - how cool is that? - just over an hour ahead of the leaders. Should I reconsider those tombstones I handed out? No. They trail a pair of rock-solid seasoned winners by 7. The chance of both backsliding is extremely unlikely.

I would consider only 4 possible winners tomorrow, with co-leaders Perry and Cabrera as co-favorites.

6:47 ET Gutsy touch putt for Campbell. He's back to -10. With Cabrera's drive into the trees on 18, Campbell may wind up in the last group with Perry.

6:32 ET Chad Campbell hadn't made bogey, then made a doozy double on 16. Cabrera made birdie at 17 to tie Perry at -11. Furyk finished with a 68 for -8. So it will likely be Cabrera paired with Perry in the final group Sunday.

6:08 ET Stricker finishes with a bogey-free 68. He's 4 back, but that lead will likely widen. Furyk just made his first bogey. I think the lead going into Sunday will be -13.

5:40 ET We have a Final Four. Three straight makes for Furyk on 13-14-15 gets him within 2 of the lead, very temporarily, as Perry has an eagle putt coming.

5:29 ET A couple of Amen Corner bogeys for Perry while Campbell made par. Campbell at -11 leads Perry and Cabrera by one. They all have a pair of par-5s left that everyone's been ringing up. Mickelson finishes with 71. At -4, RIP PHIL. But he and Tiger have the same score...could they be paired together tomorrow???

4:51 ET Tiger and Phil make birdies here and there, but haven't gotten serious streaks going. Cabrera just birdied 10 to get within one. CBS continues to follow Stricker, Furyk, and Clark, but this is looking like a 3-man race.

3:58 ET Sean O'Hair and Ian Poulter have joined Steve Flesch in the clubhouse with 68s. I'm going to let Tiger get through the par-5s on 13 & 15 before I put him in the ground. And Lefty just gave another one back.

3:17 ET As expected, nobody has yet taken a serious run at the leaders (Campbell and Perry have each moved to -10). The best round going is Steve Flesch at 4-under, bringing his total to -3. Phil Mickelson has played it smart with birdies on both par-5s on the front, and even on the rest. He's at -5. Tiger is level for the day at the turn and still eight shots back. I am about an hour from dismissing his chances.

1:55 ET Tiger started his day with a "double" on 1, but has rebounded with a bird on 3. He's 8 shots back. Mickelson and Oglivy both birdied the par-5 2nd (which Paddy Harrington scored a "9" on earlier - he's done) to get to -4, five shots behind the leaders who don't tee off for about 50 minutes.
Posted by BACKTIME at 10:34 AM