What's wrong with the Yankees? We should all have such problems 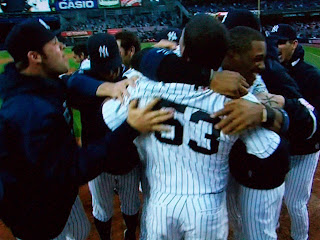 Time for The Pinstripes' 15-game checkup. Much has been made off those empty high-dollar seats that sap the energy from the TV coverage. Or maybe the alarming rate that baseballs are leaving the new house. Or the ugly, crooked scores of some of their losses: 10-5, 15-5, 10-2, 22-4.

The bottom line is that the Yankees are 9-6. They take the momentum of Melky Cabrera's 14th inning walk-off HR into a weekend series at Fenway which should be a great barometer. 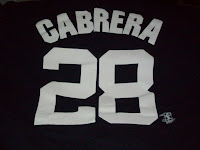 Melky was my favorite up-and-coming Bomber when he took over in CF back in 2007. But last season he stopped hitting. This year he changed his number from #28 to the #53 vacated by Bobby Abreu's departure. The change of jersey didn't change his fortunes right away. Brett Gardner still beat him out in the spring.

Joe Girardi favored the speedier outfielder who can make more happen on the bases. I prefer the outfielder more likely to circle the bases. Melky has made most of his limited opportunities with a team-high 4 HR in just 23 At Bats.

My couch is over 800 miles from River Avenue & 161st Street, but here’s why I think the Yankees will finish well above the .600 mark they’ve posted thus far.

Not only has his bat been missed, but think about just having his presence in the lineup with guys like Teixeira, Posada, Swisher, and a smokin’ Robinson Cano (10-game hit streak) around him.

The Rotation Will Straighten Out

Forget Chien-Ming Wang’s spiral into the pitching abyss, he was 54-20 in his career before this unspeakable stretch. You have to just hope there’s nothing seriously wrong with him and keep sending him out there.

Joba Chamberlain is still a wild card. An awful lot of fanfare for a guy with 6 career wins. Would he be a better fit in the pen? I have wavered on this, but I’d have to ultimately say no. I saw him as the ace of Nebraska’s Big Red pitching staff, going 7+ innings almost all the time. If anything, his earlier days in the bullpen may have set him up not to be as durable a starter. But he will get stronger.

AJ Burnett (32) and Andy Pettitte (36) have been money. The other three starters are all under 30. There are no holes in the rotation, and A-Rod’s return will bring a deep lineup which leaves the biggest question mark…

Problems In The Pen

And even that is showing signs of turning around. They got 7 1/3 scoreless innings from the relief corps in the 14-inning win.

Rivera has been Rivera (7 scoreless IP, 4 saves). Brian Bruney has been Joba. He has 12 K in 8 innings, and allowed just 5 baserunners.

From the left side, it’s been a nightmare. Damaso Marte has been a disaster since they acquired him last year, and they don’t have a lefty they can count on for a single big out. The Yanks’ 3rd best reliever is a guy named Jonathan Albaladejo.

Fortunately, middle relief should be the easiest thing to pick up from elsewhere as the season wears on. And their presence should be diminished once their first-class group of starters hold up their end of the bargain.

I like Joe Girardi but he looks more tightly-wound in these April games than Joe Torre did in 12 seasons. Hopefully he'll be able to stop driving the Yanks like an NY cabbie and hit the cruise control soon enough.
Posted by BACKTIME at 9:11 PM