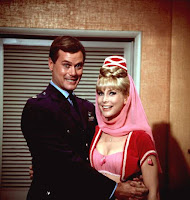 Ever since Jeannie popped out of the bottle, she was all about her master's wishes. She always dialed it up for the Majors (Major Nelson, Major Healy).

This morning I feel like the master of my domain, like I just found a genie in a bottle.

The taxes are done, I've run a couple of miles, and I just pulled a chorizo and egg stuffed pepper off the grill (is there any doubt now that my wife's out of town).

I checked in on Augusta, and if Stephen Ames wished for an eagle on his 2nd Hole, he got it and is off to a nice start. Check back mid-afternoon for real-time updates.

7:36 ET Final Thoughts: Campell's 65 was huge, but it isn't clear ofthe masses. Thirteen players are within 3 shots. And Padraig Harrington looms at -3 with Woods and Zach Johnson at -2. Coverage was geat. Light on interviews and flashbacks. Lots of action. See You Tomorrow!

7:21 ET Tiger Woods air-mailed the green on 18 to settle for bogey. After missing makeable birdie putts on 16 and 17, his -2 round could have been much better. He's T-20 and 5 shots back from 1st round leader Chad Campbell.

6:44 ET Tiger missed the putt, as did Trevor Immelman on 17 to stop his own string of 3 straight birdies.

Here's a fun fact about Tiger: Barring a rain delay, you won't see a single shot of his live on TV tomorrow. Tiger tees off at 10:45 Friday and Augusta National is strict about the limits on the TV coverage. I'm sure you'll see the Tiger 2nd Round recaps frequently. To credit the CBS/ESPN coverage so far today, they haven't over-Tigered us at all. Let's see if he finishes strong today, 17 and 18 have been claiming victims.

6:05 ET Tiger Woods just made back-to-back birdies on 13 & 14. After Campbell finished bogey-bogey, and Hunter Mahan is making a total mess of 18, it's ON.

5:34 ET Nice to see Kenny Perry birdie at 13 to go to -4. In 2008, he didn't play the Masters (didn't qualify), US Open (didn't try to qualify), British Open (didn't choose to attend), then withdrew after first round of PGA. Even though he was a no-show in the Majors, he rocked the Minors, winning 3 times in '08 and he won in Scottsdale earlier this year.

5:03 ET A little bit about Chad Campbell who just went to -9. Earned a "battlefield promotion" after winning 3 times on the Nationwide Tour in 2001. Runner-up to Shaun Micheel in 2003 PGA before winning the Tour Championship later that season, his best year. Didn't qualify for last year's Masters, but was a captain's pick on the victorious 2008 Ryder Cup team, so somebody knows something.

4:37 ET Mike Tirico is actually interviewing Larry Mize, who had a first round 67. Other former champs: Mike Weir is in at -4 and Bernhard Langer at -2. Meanwhile, Chad Campbell just went to 8 under.

4:14 ET Obligatory first Augusta scenic montage with pink flowers and azaleas (are they the same thing? Beats me). Defending champ Trevor Immelman is +2. Robert Allenby just shouted "you bastard" at an insect on his tee shot at 12.

3:06 ET Right now, 39 of 96 entrants are under par. So today the course can be had. Shingo Katayama is complete with -5. Chad Campbell is -5 at the turn. Tiger (even through 4) and Lefty (even thru 15) haven't yet taken advantage.