Jets fans are all Marks

Gang Green has caved in to public pressure once again. Ownership is now about pleasing the fan base and creating buzz. But not winning championships. 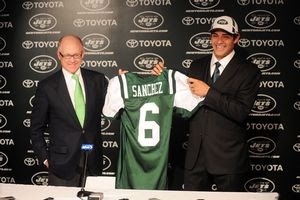 Nothing against Mark Sanchez here. He's a good player. The Jets fans wanted him and he wants the Jets, and he's saying all the right things. But the Jets fans also wanted Brett Favre last year.

My perception: Mark Sanchez is a phone whore. 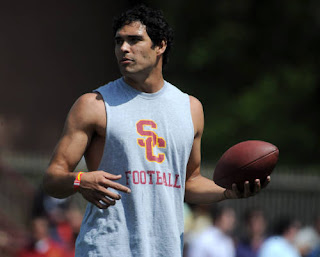 Oh he's out there. He'll be texting and blogging and twittering all over Gotham. Talk about a media darling. He could knock A-Rod off both the back page and Page Six.

Like I said, he's good. I'll be rooting for him. But is he worth 4 extrta guys? Including a 2nd Round pick, two defensive regulars and Brett Ratliff - potentially a legit NFL QB himself (stranger things have happened - I saw the kid kick some ass in an Emerald Bowl upset of Georgia Tech).

Of course not, he's a pipe dream. You've got Thomas Jones, Leon Washington and strong O-Line. Don't turn this over to a rookie. Then again, the last guy threw 22 picks, and he was no rookie. But he was in-demand by the desperate, delirious, dreaming Jet fans.

When the deal got done, don't you think Eric Mangini did a fist-pump or two at Browns HQ? He was the scapegoat for Favre and he passed on Sanchez. And he will use the picks and players to build a winner, not to make headlines.
Posted by BACKTIME at 8:33 PM