The clock has run out on money-making season. So I get home to find that the Walt Disney corporation was shooting a pilot for a crime-drama about a two-minute walk from my front door. They must have forgot to call. 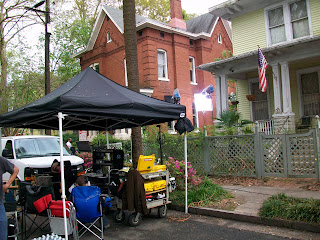 So I went over there myself. I'll do production for food. What do you need, some re-writes? Maybe some timing? Starbucks run? Not likely. They had enough people on the clock waiting for the rain and clouds to break up. 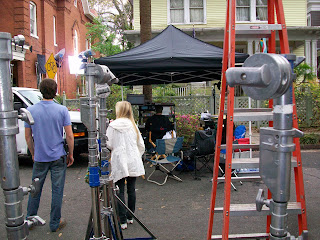 ABC is shooting a pilot called "Solving Charlie" a few blocks from home base. Apparently it's a series in which a detective relies on his brilliant 11-year old brother to solve murders. But the crew of about 80 on site are a little short on details. It's either that it's some kind of big secret or what I suspected all along...most people on a production have no idea why they're there.

Or maybe there's some kind of superstitious deal with a pilot, where if you brag about it - it automatically takes a nosedive. Like talking about a no-hitter or mentioning a foul shooter's streak while he's on the line.

Anyway, it can only achieve greater success than the feature film that shot scenes in my building in NYC. A forgettable romantic comedy called Down To You with Freddy Prinze, Jr and Julia Stiles. Careers that haven't been heard from since. Maybe I'm the jinx.

Labels: Down To You, Savannah, Solving Charlie