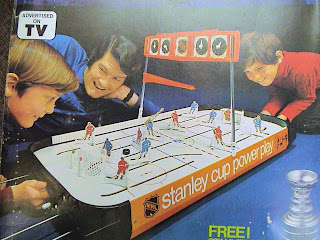 So I used the Yankees' off-night to bounce in and out of Stanley Cup Playoff games. And much like missing your favorite soap opera for several months, it wasn't hard to catch up.

I watched the Versus coverage and saw a total of 6 announcers - 3 game, 3 studio. I only was familiar with one: studio host Bill Patrick, and had only heard of one other: studio analyst Brian Engblom. The TV coverage included in-game player interviews. Pretty cool. Hockey has always been a media-friendly sport as far as access and this is a good example, as long as they speak English well.

Rangers Goalie Henrik Lundqvist was the hero, single-handedly stonewalling the Caps' attack that out-shot the Rangers 39-21. The great Madison Square Garden crowd chanted his name "Hen-rik" on several occasions. The surprising Blueshirts scored a 2-1 victory and are now one win from the East semis.

Washington's superstar forward Alexander Ovechkin, the NHL regular season goal leader finally got his first goal of the playoffs. But it wasn't enough and too late. Is this Alex hockey's equivalent to another multi-million dollar Alex that the New York fans are so familiar with. Hmmm?

21,000+ in Montreal saw their disappointing Canadiens drop an 8th straight game as Boston crushed them in a 4-game sweep.

So what now? Does Habs GM/Head Coach Bob Gainey now fire himself?

It was the Bruins' first series win since 1999.

Best crowd of the night (and that's saying something). Calgary held serve at home, taking both games in the Saddledome to even the series. The red-clad crowd wouldn't let the Flames quit even after blowing a 4-1 lead. They finally put it away on Jarome Iginla's 2nd goal of the night, an empty netter with just 11 seconds left.

OK Backtime hockey fans, how did I do?
Posted by BACKTIME at 10:57 AM