Anatomy Of A Red Flag 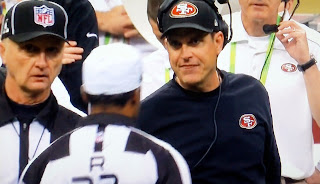 There was a fascinating game-within-the-game moment in the 4th quarter of the Super Bowl. Niners head coach Jim Harbaugh made a real winning gamble and should be commended as such.

With under 8 minutes to play and the Ravens leading 31-29, Joe Flacco found Anquan Boldin on a 2nd & 8. Boldin put his head down and was tackled right around the line to gain. He got a favorable spot, and after the measurement Baltimore was awarded a 1st down. 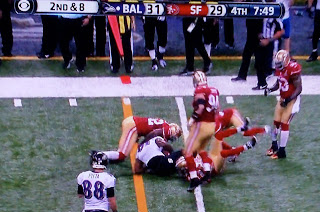 CBS showed one high-angle, non-definitive replay, and Nantz & Simms went on to a human interest story on Flacco with a token hat tip to Boldin's effort on the play. They made no mention of the spot, and if the crowd was pensive about it we certainly didn't see it.

So what would make Jim Harbaugh, at ground level, challenge the call? He was sticking his neck out in a huge moment in the biggest game of his life, risking a time out he couldn't afford for a possible 3rd down & a half-yard.

Harbaugh obviously trusted his staff, the eyes in the sky. But how does that all work? CBS didn't really give them a definitive look, and they had to challenge before the next play.

Does the team receive access to all 30+ camera feeds that the network uses to broadcast the Super Bowl? If so, do they assign someone to watch each of them? Then how do they get the word to the head coach to pull the trigger on the red flag?

My guess is that there's a protocol in place. There's a specific assistant coach or quality control or operations guy who has to use the right verbiage (think "code red" or something like that). Then they have to get the word to a higher-up assistant who has direct access to the channel on Harbaugh's headset.

And most of all, Harbaugh has to know the risks and alert the officials that they're going to challenge the play. That triggers a TV timeout, and allows the production team to generate all the pertinent angles. 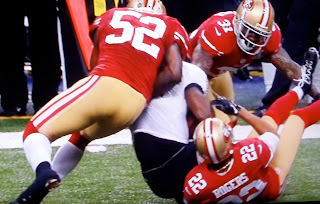 The call is ultimately overturned and Harbaugh's gambit is a winner. But again, the schematics of the decision is something that can't be underestimated. Leave it to a coach that thinks of everything.

Baltimore converted the 3rd & short, a back shoulder completion to Boldin. The drive resulted in a FG which made the game 34-29. San Francisco's would-be game-winning drive obviously came up short. And you can question Jim Harbaugh's temperament or play-calling. But not his guts, or his command of all phases his team.
Posted by BACKTIME at 7:45 PM