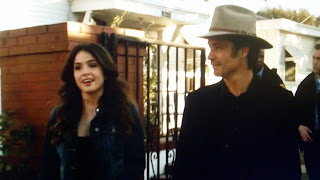 The DirecTV guide description of last week's Justified episode "Money Trap" pretty much says it all:

"Raylan finds himself caught between a foxy grifter and an old nemesis out for revenge..."

Just how Elmore Leonard drew it up. In fact, much of this particular hour was lifted from Raylan, the novel. It includes the long-awaited introduction of Jackie Nevada, the card-shark Butler grad whose sense for banter and nostalgia belies her years on this earth. Her character comes across better on paper than on the show, but it doesn't make her any less attractive. 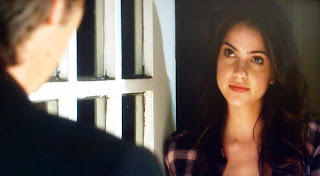 Jackie is the daughter of professional poker player Reno Nevada, and was almost named "Sierra," which of course leads to some witty back-and-forth with Raylan. She's another one of Elmore Leonard's dark-haired pistols. After all, it was J Lo who played Karen Sisco in Out Of Sight. And it was the very underrated Carla Gugino who played Sisco in the short-lived TV series. 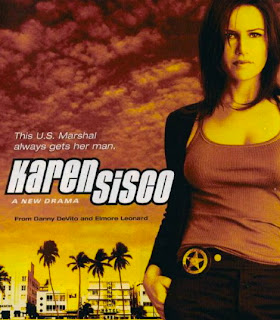 So Jackie is going to be the next one on the "merry-go-round" with Raylan, who seems to attract women with a certain moral flexibility and colorful vocabulary.

The other show-runner from the DirecTV description was the "old nemesis out for revenge." This storyline was so memorable from the book that I thought I had seen the first-run episode before.

In fact Jody and Kenneth (Kennet') make a sharply-produced video to call out Raylan, who watched it with wide eyes. Raylan and Jody  have their showdown in Raylan's home bar and Raylan pumps him full of bullets.

Jackie of course happens upon the scene while Raylan's gun is still smoking, and of course it doesn't faze her. This sort of action plays better in the book, but it's all very true to the author's vision.
Posted by BACKTIME at 9:36 PM