The Next Best Show On Television

After being away for a few days I had the option of which to watch first, The Americans or Justified. One show couldn't wait.

The Americans has it all: Cold War spy shit, historical plot points, clever disguises, marital tension, and the real threat of the end of the world.

Episode 4 "In Control" is a memorable one, as both the FBI and KGB operate behind the scenes in the immediate aftermath of the Reagan assassination attempt. When Secretary Of State Alexander Haig goes on camera and assumes temporary control of the US Government (VP George H. Bush was regarded about as highly as Dan Quayle three months into Reagan's term) Phillip and Elizabeth show the complete opposite thought processing. 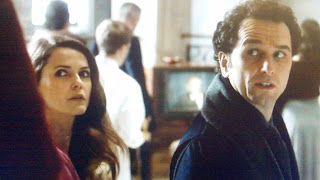 Elizabeth is the real loyalist. She is the point person on "Operation Christopher," a pre-emptive strike on US government officials. They're forced to kill a security guy while staking out Caspar Weinberger's house.

She thinks like the Russians, that since Haig was once a general and has taken "control" of the government, that this assassination is a coup d'etat. That America is going under martial law and will no doubt blame the KGB, a justification to start World War III and wipe the Soviet Union off the planet. 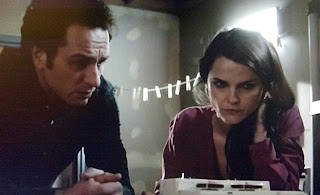 Phillip is more pragmatic, he's really an American at this point. He knows that life is good and thinks the American people are generally good, "Moscow is overreacting." And he was right.

"All these years walking these streets, living with these people, you still don't really understand this place. Haig could have ten nuclear footballs, this still wouldn't be a coup."

The FBI was of course dispatched to find the Russian angle, and then determined that John Hinckley Jr. was a nut.

So much like the US history with the Soviets, the war was almost all hyperbole. Credit to both sides for not pushing the button.
Posted by BACKTIME at 10:55 PM