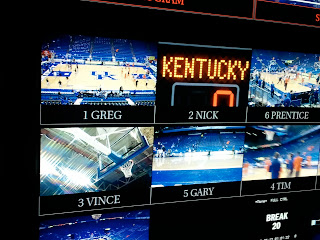 There are better venues for college basketball: Allen Fieldhouse and Cameron Indoor come to mind. But for imagery, color, and pure fanaticism, it's the Big Blue Nation at Rupp Arena hands down.

Twenty thousand Kentucky fans go to the game, and half of them stay to hear Coach Calipari do the radio postgame show afterward.

And unlike the aforementioned basketball museums, Rupp is still a multi-purpose facility. Last night I wheeled into Lexington and the area was swamped because of the Rascal Flatts concert.

So after I finished my prep for the game I went over and checked out the teardown at Rupp, they only had 16 hours to get the house reset for hoops. 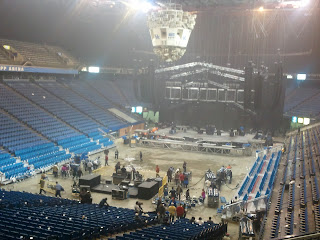 I wonder if they have hockey games here because they had one for Saturday's Auburn-Kentucky game, without the ice. It was a chippy foul-fest that featured a couple of technical fouls, some cheap shots, and one ejection. 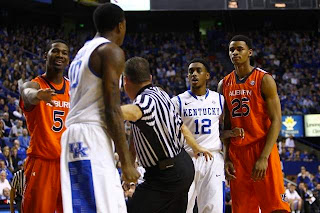 But Kentucky kept their composure and what once looked like a lost season is turning into a very good one. The Wildcats now have won 5 straight to go to 8-2 in the SEC, and are headed to Gainesville for the conference game of the year Tuesday against Florida.
Posted by BACKTIME at 7:21 PM