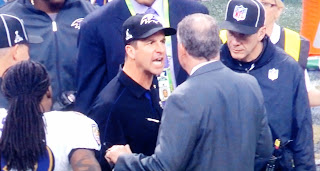 The NFL is kind enough to give the Super Bowl participants an extra week off to prepare. Because of the intense focus and the hype, everything is heightened when the soup's on.

Everything football related is scrutinized and over-analyzed. The teams live in the familiar structure of a 60-minute football game so that they're not distracted by all the extraneous nonsense that comes with being in the Super Bowl, and the supersized halftime. But nothing prepares you for a power delay.

Even with a 28-6 lead, playing defense on a 3rd & 13, John Harbaugh completely lost it on what looked to be an NFL rep in about the 26th minute of a 35 minute delay.

And you feel for him. Power surges and half-hour delays are forgettable tap-dances that happen at the Tad Smith Center in Oxford, Mississippi (I was there two weeks ago), not at the SuperDome during the SuperBowl.

Meanwhile, the Niners were completely on their heels. The Jacoby Jones kick return let the air out of them coming out of halftime. But the second halftime (as it were) gave SF a chance to recharge their batteries.

Bill Cowher on the CBS set even questioned whether they should go to Alex Smith. You wonder whether it crossed Jim Harbaugh's mind for a split-second (he seems to think about everything). 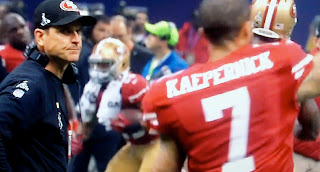 Harbaugh (Jim) didn't waver and Kaepernick was brilliant. What happened in the game's final three minutes was remarkably similar to the end of the NFC Championship game, but on the other side: wasted time on the clock, misspent timeouts, confusion right up until the end of the play clock, turnover on downs with no time left to do anything of substance. Does that about cover it?

It was also very similar, on the flip side, to San Fran's 41-34 win at New England when they blew a 28-point lead.

Congrats to the Ravens, but tomorrow on Backtime: The game's most fascinating moment, and why Jim Harbaugh is worth every cent.
Posted by BACKTIME at 11:59 PM