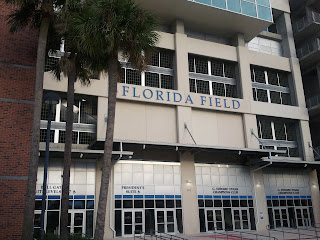 Looking forward to spending a February Wednesday in the lobby of a college football stadium.

As far as non-event TV coverage goes, I have some some experience. The days are grueling and claustrophobic. I've worked 9 NFL Drafts, 5 NBA Drafts, and one MLB Expansion Draft. But this will be my first National Signing Day.

Florida is expected to have the #1 recruiting class in the nation so the network sent their #1 field producer (yeah, right).

So we'll be watching a fax machine, gathering information and reactions, and feeding the beast.

I can't talk about our meetings with the Florida coaches or the Recruiting Nation gurus, just know that my Wednesday will begin (well) before sun-up. The nation's #1 recruit Robert Nkemdiche, a defensive end from Loganville GA, will announce at 7:30 AM ET. Florida is in the mix, though Ole Miss is expected to be the choice.

That kicks off nearly 12 hours of coverage. I've already researched our content for tomorrow, now I've got to make sure we have food and there's a bathroom nearby. You know, producer stuff.
Posted by BACKTIME at 9:09 PM