This is Opryland. You probably know about the Gaylord Opryland Hotel and Conference Center complex in Nashville, but until you've been there it's hard to imagine the scope and size of the complex. You could probably see it from space.

It's got over 2700 rooms, a dozen restaurants, shops, salons, cafes, and still plenty of space to roam around. I brought my breakfast and coffee to the Cascades solarium. 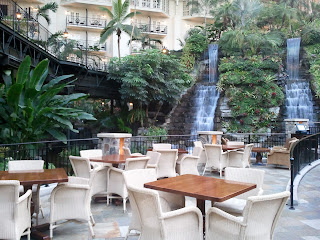 As a business hotel it kinda sucks. It's a resort - sort of like checking into a Vegas casino with waits for valet parking and check-in. And extra fees are tacked onto everything like business center access and UPS/Fedex package delivery.

But for one trip, I could stomach some of the hassles for the novelty aspect of the place. That and the two dinners were very good. Wasabi's was good sushi - the rolls were pretty sloppy but tasted good. And Saturday night dinner at Findley's Irish Pub was outstanding. Both were pricy but weren't the standard theme parkish fare you'd expect.

In between the two dinners was work - Vanderbilt annihilated Missouri 12-1on the diamond. It wasn't just a blowout, but the production was not one to put in the time capsule. I won't explain any further, but technically think of a word with the preface "cluster."

It was a beautiful day, and next door 16,000 showed up at the football stadium for the Black & Gold Spring Game. 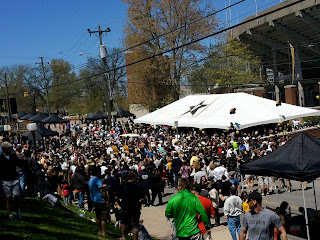 It's not the crowd that most SEC schools get for their spring game, but this isn't your typical SEC institution. It's a sports town on the rise with the Titans and the Predators, and of course Vandy's #3 ranked baseball team. But it's still Music City first.
Posted by BACKTIME at 8:31 PM