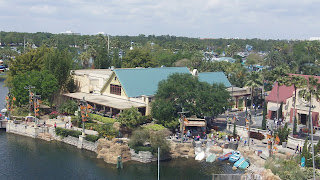 Spring Break with the kids isn't really a vacation. In fact at the end, I will most likely need a vacation from the vacation. We did Disney last year, and this year we returned to Orlando (off-campus) to see what other sadistic and expensive adventures the Tragic Kingdom has to offer.

The new Honda Pilot was called on for its first road trip, and the drive down from Savannah was low maintenance as the kids watched DVDs with their wireless headsets, while Dad listened to Michigan whack Florida in the Regional Final on XM.

So three generations of the Backtime Editorial Department found a very nice and reasonably priced 3-bedroom villa in Kissimmee as home base. After unloading all the toys, board games, clothes, and food, we headed out to Dave & Busters for a decent dinner and some video gaming. 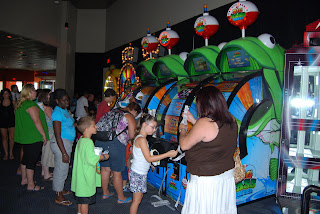 It's like Las Vegas, only with kids from all over the world. The staff was very accommodating and the dinner booth was huge. We easily could have fit a party of 8.

Then today was the all-day Sea World trip. I was told this was a "can't miss" stop in Orlando, which is a little bit of a stretch. The kids liked Hershey Park much better because they qualified hight-wise for so many more rides. Though the Sea Lion/Pirate show, and the Whale show were both fun and amazingly choreographed. 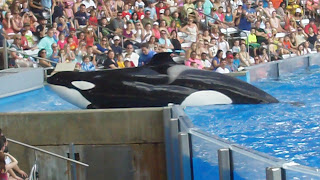 The show at Shamu Stadium was almost as well orchestrated as this trip, which still has three full days left. And as any good producer will tell you, it almost always looks better on paper.
Posted by BACKTIME at 11:33 PM