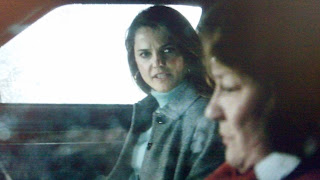 "I admire your predictability Elizabeth, it's comforting."

The Americans had been consistently excellent in its first season, but you could see it coming: a little cold water on The Cold War. In the form of the show's lead character, Keri Russell as Elizabeth Jennings. Her character has become too writer-friendly, too adamant, too one-dimensional.

Now every great show, from The Sopranos to Breaking Bad, isn't immune to some subpar episodes. But when the characters are too predictable, the luster can fade quickly. This isn't a comedy featuring Ralph Cramden or George Jefferson. Staid gets stale in a spy drama.

Elizabeth is definitely averse to the American pursuit of happiness like any good deep-cover KGB agent, but her demand for revenge on some bureaucratic lackey for the assassination of her beloved General Zhukov was just tiresome. And the flashback scenes with Elizabeth and Zhukov were just annoying.

The "covert" plan to target CIA middle-man Richard Patterson was dubious at best. But Elizabeth jumped all over it, somehow compiling a surveillance dossier on him in no time. She put together her best Jane Fonda outfit and librarian specs, and seduced him at the bar with jukebox selections and crossword puzzles. 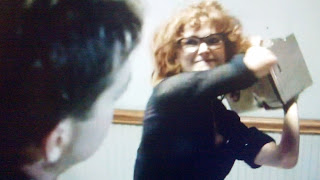 So just while the first half of the show was frustrating, it led to the seduction/abduction scene in the ladies' room at The Wheel House, which set to Pete Townshend's "Rough Boys" was predictable in its awesomeness. The sequence was every bit as great as the opening chase scene in the pilot to Fleetwood Mac's "Tusk."

Then as Elizabeth puts her life in her husband/partner's hands all the time, she can't bring herself to say the words, "I love you. Come home." 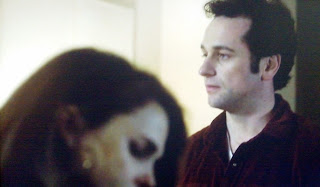 You can't blame the writers for continuing to create tension, but the actor has got to be the one to grab the viewer's attention and empathy for the character. There needs to be investment, even if the character is flawed. Despite the terrible things they do, we love Tony Soprano and Walter White. And we could drop Carrie Mathison (Homeland) in a heartbeat.

With a couple of episodes left in a great opening season, we love the ass-kicking Elizabeth, but we want more from our femme fatale and her writers. Surprise us.
Posted by BACKTIME at 10:30 PM