Mad Men: The One Where MLK Gets It 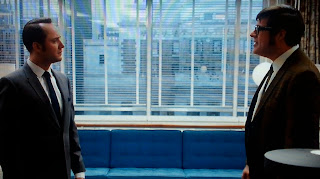 It wasn't a prediction I made in a public forum, but those are words I said to another human in advance of Sunday's episode.

Yes it's a spoiler, and yes it's as insensitive as Harry Crane bitching about missed commercial advertising opportunities with the ongoing MLK assassination coverage. Though I enjoyed watching Pete Campbell take the moral high ground with his displaced outrage.

Mad Men lives off these reactions to the times of 45 years ago, and the ensemble's soulful response was definitely something I was right to look forward to.

Matthew Weiner's storyboard also dealt with the ugly riots in the aftermath of the death of Dr. King. It was reminiscent of an incredibly poignant episode of The Jeffersons, which flashed back to "The First Store," George's first store opening the day Martin Luther King, Jr. was shot. George had to sift through his anger and find the perspective to cool down his son Lionel.

But I digress - we wondered how Don & Peggy would continue to be connected after she left SCDP. After the submarine job by Peggy's firm did on Heinz last week, the shock on award night was a perfect opportunity for them to intersect. And the national tragedy was a great chance to realize what's around them that they've taken for granted. 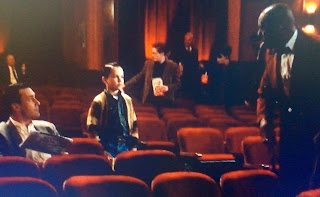 Don has a son who is growing up, opening Don's eyes for the first time while they take in a double-feature of Planet Of The Apes. But Don is haunted by his own childhood and his own father and realizes briefly how lucky he is. 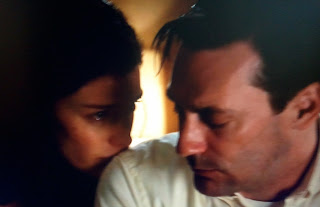 And Don has great scene with Megan. Despite all the pretending in their marriage, she seems to be the one person who can extract Don's innermost feelings.

Peggy put her bid in on an impressive Upper East Side apartment, and it fell through. So she finally asks Abe, her hop-along hippie/flunky boyfriend what he really thinks. Abe wants to raise their children around "different kinds of people," and suggests the West Side. 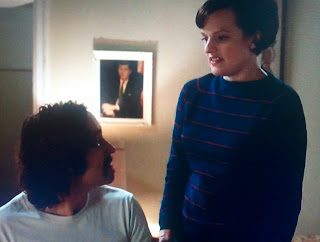 I think Peggy's move to the West Side over the East Side is one of the great triumphant, seminal moments in the history of the show, but I'm biased.

Don and Peggy's self-hating, shallow lives in advertising have somehow netted people that love them unconditionally. And it took a horrific event to jolt them into reality.
Posted by BACKTIME at 10:12 PM