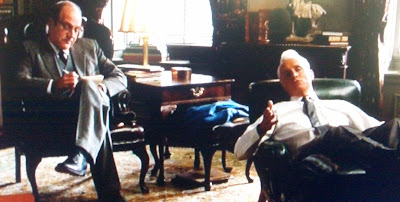 There's nothing avant garde about a psychotherapy session in a TV drama, but Roger Sterling on the couch was as entertaining as television gets. Not only that, it set up the theme for the episode and the season: mortality.

"What are the events in life? It's like you see a door. The first time you come to it you say, 'Oh, what's on the other side of the door?'

Then you open a few doors, then you say, "I think I want to go over that bridge this time, I'm tired of doors.' Finally you go through one of these things and you come out the other side and you realize that's all there are: doors. And windows and bridges and gates, and they all open the same way. And they all close behind you.

Look, life is supposed to be a path, and you go along and things happen to you and they're supposed to change you, change your direction. But it turns out that's not true. It turns out the experiences are nothing. They're just some pennies you pick up off the floor, stick 'em in your pocket, and you're just going in a straight line to you know where.

It is the eve of 1968, one of the most turbulent years in our nation's history. How will Matthew Weiner and the Mad Men think tank handle the ongoing Vietnam War? MLK and RFK assassinations? LBJ's lame duck year? Bloody riots? Black Power? The Detroit Tigers?

They've already dealt with life and death - Don Draper's encounter with the doorman and the surgeon (and the surgeon's wife and Dante's Inferno) all set against the backdrop of his Hawaii trip and a young serviceman facing the horrors of Vietnam and marriage: "The jumping off point."

And Roger's self-analysis comes fill circle as he deals with the death of his mother (This is my funeral!) however delayed the reaction. And his experiences with his ex-wives (both of them) and his daughter are just more pennies in his pocket.

Now only if we could kill off Betty Draper Francis. She's a character that continues to be unnecessary, unlikeable and unsympathetic. That would be a mega plotline - Betty dying (most likely behind the wheel - don't think that reckless driving ticket was in the script for no reason) and the kids moving in with Don and Megan. That would be a significant doorway to inch through. And deal with death in the most personal possible way.
Posted by BACKTIME at 2:59 PM